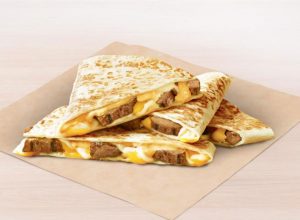 Taco Bell’s menu seems to always improve, minus the time they discontinued my favorite 7 Layer Burrito. By mixing the same base ingredients into different combinations, and giving them a Tex Mex twist, they’ve remained at the top of the fast-food game. The franchise offers three types of quesadillas, but today, I’ll be reviewing the Taco bell Steak Quesadilla.

The franchise offers three types of quesadillas, each of them on a flour tortilla, which is interesting because, in Mexico, flour tortillas are virtually unheard of. Most meals are made with corn tortillas. But Tex Mex food can get away with these variations. The Taco bell quesadilla menu offers a seasoned steak quesadilla, a Shredded Chicken Quesadilla, and a Three-Cheese Quesadilla with a mixture of mozzarella cheese, cheddar cheese, and pepper jack cheese.

The Taco Bell Steak Quesadilla includes seasoned steak strips, melted shredded cheese, with a choice of creamy Chipotle or Jalapeño Sauce, stuffed into a flour tortilla and cooked in a grill press. There’s not a lot of pizazz to this item, but it’s heavy on the steak, which is the star of this show. Taco Bell uses 100% USDA premium steak, and they prepare it in a similar way to their beef; after simmering, it’s drained of excess fat and pre-seasoned with their signature blend of seven spices and seasonings.

The Steak Quesadilla is straight-forward in flavors and presentation- not a lot of extras with this one, though you can customize it by asking for some of your favorite toppings if you’d like. The steak strips are well-seasoned and just the right texture. The Chipotle sauce has a sweet tangy flavor that compliments the salty savory flavor of the meat. But I prefer the Jalapeño sauce for the spicy contrast. The flour tortillas are freshly-grilled and crispy – perfect for holding the quesadilla together. The quesadilla is made with a large tortilla, but I would need at least two of them to feel full. This is a good excuse to get one quesadilla with each sauce.

Taco Bell’s Steak Quesadillas have 520 calories, 28 grams of fat, and 1200 mg of sodium.  The Shredded Chicken version has about 310 calories, 13 grams of protein, and 705 mg of sodium, so if you’re watching your diet but still have a quesadilla craving, know you have options. However, the best way to eat a healthy quesadilla is to make one yourself with a whole-grain tortilla and lots of veggies.

For a change of pace, I enjoy a Steak Quesadilla every once in a while. My complaints are minor. It’s a bit hard to eat on the run, and if I wait to eat it once I arrive at my home or office, it’s not as hot or crunchy. It’s also not as filling as some of the other Taco Bell items, so if I’m extra hungry, I’d rather order three crunchy tacos or a few inexpensive simple items off of the Cravings menu. The Steak Quesadilla is tasty but not very filling and not one of the healthiest choices. It’s just a good option.

If you specifically want “steak,” this is probably one of the best options on the menu. But if you’re not hung up on the type of meat, I’d say there are a lot of other delicious options like the Taco Bell $5 Box.

Have you tried the Steak Quesadilla or any of its cheesy grilled friends? Which is your favorite sauce? Let us know in the comments below.