You are here: Fast Food Prices > BK’s Suicide Burger (AKA The Quad Stacker)

If you love meat and cheese but have a strong disdain for veggies, BK’s suicide burger was made for you. Possibly by you, I don’t know your life. But you won’t find this veggie hating beast on BK’s menu often. 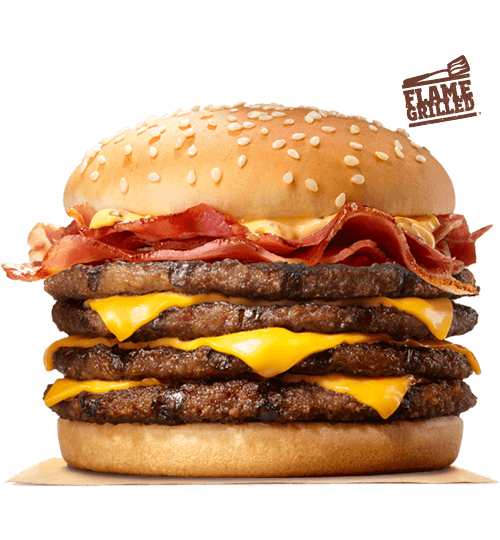 It has four patties, four slices of American cheese, and eight slices of bacon mashed between two grossly undersized buns and drizzled with BK’s version of special sauce. Which is about the same as Mc. D’s, IMHO.

If you’re feeling a bit impish at the thought of ordering something coined a “suicide burger,” you can opt to order the equally-common but slightly-less-jarring “quad stacker” instead.

You’ll get the same burger, less the awkward stares.

It presents itself as a tall, but mostly oozy-gooey mess of cheese and sauce. Though not nearly enough sauce to really taste it. So asking for extra sauce is almost a must with this guy.

How Do You Order A Suicide Burger From BK?

And, again, if you’re a bit squeamish about yelling “suicide” over the din of a BK lobby, you can ask for a quad stacker. Since BK offers stackers of all sizes, whoever takes your order should know what you’re talking about.

Even if it is a BK secret menu item.

In the event you get awkwardly gawked at by the cashier, order a burger with four patties, four slices of cheese, and eight pieces of bacon.

But what does it cost? Typically, somewhere in the range of $3.99 – $5.99, depending on where you live. Which is still relatively impressive for eight slices of bacon. As thin and papery as they might be.

Now, if you really want to go above and beyond the call of duty here, I highly suggest ordering a side of onion rings and tossing them on this monstrosity. Just for good measure. Mostly so you can claim it had veggies, even if they were deep-fried.

What does it cost you in calories? Suffice it to say this isn’t diet-friendly. It’s not even body-friendly, really. But I’m sure you deduced that from the name. If you want to order this, you don’t want to look at the nutrition.

Not nearly as common (or as cheap!) But it is possible to order a vegetarian version of this behemoth. Simply order four veggie patties, for slices of cheese, and their sauce. You have to forego the bacon for now because they don’t have a veg version (yet.)

If you happen to get someone who’s been around a while, you might be able to get away with ordering a “vegetarian quad stacker,” but in the event that doesn’t work, stick to the script. As with the all-meat version, I suggest onion rings and extra sauce here too.

But take that with a grain of salt because my relationship with onion rings is… complicated.

What did you think of BK’s quad stacker? And mods we should consider adding to our next one?