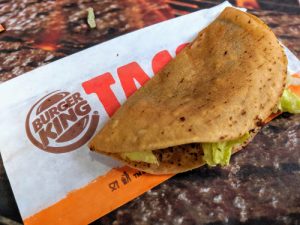 Burger King is known for its juicy burgers throughout the world, but that doesn’t stop them from introducing their Crispy Tacos for the third time. Back in 2002-2003, Burger King unveiled their Crispy Tacos, tailgating on the enormous success of Jack-in-the-Box’s beef tacos. Discontinued for a lack of enthusiasm among its customers, the franchise re-released its tacos nationwide in 2009-2010 hoping for a better reaction from its customers. Once again, the item was removed from the menu after a year or so. But the third time’s a charm, right? Let’s find out.

It may seem like a random decision to experiment with Tex-Mex menu items, but if Jack in the Box can do it, why can’t the self-proclaimed king of burgers do the same? This is the third release of Burger King’s Crispy Tacos, but without much of an improvement, some fans suggest Burger King is only attempting to bring back a nostalgic menu item. Sometimes, we appreciate that things never change.

With giants like Taco Bell and Jack in the Box in the taco game, Burger King wants to offer its customers another popular fast food taco option. However, Taco Bell serves more than two billion tacos each year, and Jack in the Box serves more than 554 million tacos per year. Since Burger King only releases their tacos every few years for a limited time, it’s a bit challenging for them to compete.

There is no Tex-Mex menu at Burger King, so you’ll find the Crispy Tacos mentioned in their “Chicken & More” menu section. Each order comes with only one taco for $1, so you’ll want to order at least two, even if it’s just a snack.

The biggest variation in Burger King’s Crispy Tacos is in their presentation, which seems to vary by location. Whereas some taco shells are softer, some are harder. Some have hot wilted lettuce pressed inside, some have big chunks of lettuce. Some are served with shredded cheddar cheese, some are served with a melted slice of American cheese. As for the meat, it is either a thick paste or an oily paste.

Burger King’s tacos are more of a side item than a main menu item. They are small and flat, without a lot of toppings and veggies to add a more fresh flavor. Greasy and deep-fried, they are more comparable in presentation and taste to a mini version of Jack in the Box tacos (even though Jack in the Box sells two of their beef tacos for the same price as one at Burger King). 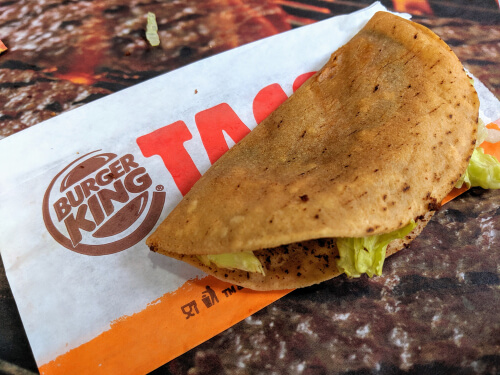 Burger King advertises the taco as a “crispy, crunchy tortilla filled with delicious, seasoned beef, shredded cheddar cheese, and lettuce, all topped with just the right amount of our savory taco sauce.” This was not quite my experience.

Each Crispy Taco is deep-fried and served hot in a paper sleeve. The shell is both hard and soft, depending on where the filling is placed inside. Once I opened it up, I could see that the soft part of the shell was due to the oily ground beef plopped in the middle of the shell. The area around the outside of the meat is pretty hard – like an over-cooked tortilla chip. The shell itself wasn’t salted, and it did not have much taste besides the oil it was cooked in.

The meat inside is not quite the same as the photo advertised. I expected to taste ground beef, seasoned with a Tex-Mex blend of spices, but it’s more like overly-grounded beef, similar in texture to refried beans with taco meat seasoning. It feels more like a beef paste than a solid bite of ground beef, and it’s so greasy that it leaves a film of oil in your mouth.

There is supposed to be a sauce included inside the Crispy Taco, but I couldn’t distinguish a separate sauce from the meat.

The Crispy Taco includes chunky pieces of iceberg lettuce like you may find inside of Burger King’s Whopper, but not shredded and placed along the top as the photo suggests. If the lettuce is placed into the taco too soon after it’s removed from the fryer, it’s soggy, wilted, and warm. That tends to take away some of the contrasting flavors and freshness every taco needs.

The shredded cheese is ok if it’s melted onto the meat, but if it’s placed on top of the lettuce, it just falls out because the taco is pressed tightly shut and fried closed. Cheddar cheese tastes better on the Crispy Taco than a slice of American cheese that some locations use.

At 170 calories, the Crispy Taco is one of the lighter menu items that Burger King offers. However, for its size, it is high in sodium and saturated fats. If you order more than one, this can add up quickly, and there aren’t many veggies to counteract the heaviness of the meat and oil. The taco is prepared in a fryer that’s also used for products containing wheat and milk, so this is worth noting for anyone with dietary restrictions or allergies.

If you’re craving a fast-food taco for under a buck, this is a fair contender. It isn’t an authentic Mexican taco (which would never be served with American or cheddar cheese), but more of a less-beautiful Tex-Mex or American-style hard taco. If that’s what you’re craving on the go, this hits the spot.

I would classify the Crispy Taco as more of a side item – about as filling as a small fry. If you’re hungry, I’d recommend ordering more than one because it’s about as wide as my hand and it’s oozing more grease from the edges than toppings. Otherwise, for a dollar, it’s not bad.

I don’t think the goal of this taco is to compare it to authentic Mexican tacos, so once I get passed that, I can appreciate its fast-food Tex-Mex vibe. However, I find it confusing to purchase a taco from Burger King. There are no sauces to spice it up, the serving is small, and the presentation is inconsistent. If you can’t find your favorite Tex-Mex restaurant, and Burger King is your only option to satisfy your craving, the Crispy Taco will do the job. But to be completely honest, I would probably not eat it again.

Have you caught Burger King’s Crispy Tacos during its limited-time releases? What did you think? Have you tasted any differences over the years? Let us know in the comments below.