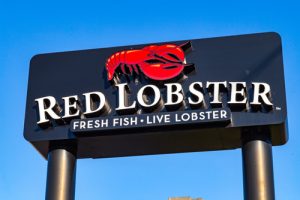 Sometimes, you just want to eat enough lobster and shrimp scampi for four people, without emptying your wallet. We get it. If you’re a seafood lover, Red Lobster can be one of the more expensive restaurants to eat out, especially when you tack on appetizers, drinks, and desserts. However, you don’t have to fill up on Cheddar Bay Biscuits (unless, of course, you want to) because Red Lobster is always releasing new coupons and offering weekly specials, deals, and promotions.

You really have no reason to not eat at Red Lobster (unless you hate seafood, then fair enough) because their opportunities to save a few bucks are endless. If you join their rewards program, you’ll build up points and eventually earn your reward, which is typically the choice of a menu item from a preselected list. It doesn’t take long at all to earn a reward, especially if you eat at the restaurant regularly and/or are feeding a family. Once you sign up for the program, you’ll automatically receive 75 points, which puts you well on your way to getting your first freebie, which is earned at 125 points.

How does the reward program work?

For every $1 that you spend on your order, you get a point. This works as long as you’re ordering from Red Lobster directly, whether in their physical store or through their website or app. Each reward costs 125 points, so you can start redeeming them once you’ve scored that amount! To get started, just click the “Enroll Now” button at redlobster.com/rewards.

Once you’ve created an account, you’re considered a gold member. Aside from the rewards that you earn from ordering, you also receive a freebie on your birthday and a special catch reward four times a year. On top of this, you have access to insider information as well. Instead of doing the hard work of scanning through external coupon websites, you’ll get the news in your inbox, which is so much more convenient.

But it doesn’t stop at gold membership–all of those points can pile up and land you a platinum membership. If you’ve earned more than 300 points throughout the year (that’s a lot of Red Lobster orders!), you can unlock additional benefits. You get two points for every $1 spent, which means earning rewards faster. You can also play unlimited games on their restaurant tabletop device and get priority access to certain promos.

At specific Red Lobster locations, you can snag a free appetizer of your choice after spending $50 or more on gift cards. This promo only applies when you purchase gift cards at a Red Lobster restaurant or online on their website. If you choose to order your gift card online, you have the choice of sending it electronically to the recipient or through the mail with a free greeting card.

We’ve gotten questions from our friends to the north about Red Lobster Canada Coupons – are they different? The same? Better? In short, Canada Red Lobster coupons and offers are similar to the ones here in the States. Their current offers include the same weekly deals like the Build Your Own Shrimp Feast, Create Your Own Ultimate Feast, and Weekday Win Menu. The website does not advertise text alerts, but Canadian locations also offer their clients to sign up for Fresh Catch News alerts to earn promo codes and freebies.

Red Lobster’s Fresh Catch Club won’t send you out in the middle of the ocean and train you to catch deep-sea fish. Instead, they’ll hook you up with freebies, coupon codes, and exclusive restaurant news.

In the US, it’s already combined with their rewards program, so you can only join by becoming a rewards member. However, in Canada, separate sign-ups are still available.

The most popular coupon you can get from joining the email club is for a free appetizer or dessert. To redeem it, have the email pulled up on your phone when you order, and show it to your server.

You will also get a freebie from Red Lobster on your birthday – perhaps another free appetizer or dessert?

If you’re feeding the whole family, you’ve got plenty of options at Red Lobster. Their Family Meal Deals come in servings of four, with prices ranging from $26.99 to $45.99. Each Family Meal features a unique set of Red Lobster favorites, including:

By default, all meals come with Cheddar Bay biscuits, which have been an iconic customer favorite since the ‘90s. On top of it, you can also select family-size sides for most of the meals.

Out of all the Family Meal Deals, the most filling would probably be the Ultimate Family Feast, which consists of snow crab legs, garlic shrimp scampi, and still more shrimp. On the other hand, if you’ve got a different seafood combination in mind, you can personalize your order with the Create Your Own Family Feast option. This allows you to select your three favorite seafood items along with the usual sides and biscuits.

When Endless Shrimp is available at Red Lobster, it typically costs $15.99. This limited-time deal is on and off the Red Lobster menu and features different shrimp dishes each time. In the past, Red Lobster has offered the Endless Shrimp special, including dinner entrees like Crispy Sriracha Honey Shrimp, Teriyaki-Grilled Shrimp, Garlic Shrimp Scampi, Shrimp Linguini Alfredo, and Hand-Breaded Shrimp.

Spoiler alert: You can still order the Endless Shrimp special for carryout, but it’s not truly all-you-can-eat. Rather, they limit it to four orders of the shrimp of your choice, so you’ll definitely get more bang for your buck if you dine in.

During special times such as Christmas or New Year’s, Red Lobster has been known to indulge their customers with limited-time deals.

For example, back in January 2020, Red Lobster introduced a Build Your Own Shrimp Feast deal for $14.99. This was a big hit among shrimp lovers because most of the entree options were centered on shrimp. Customers get to choose between a soup or salad for their first course, dig into a shrimp entree for their second course, and finish off with a triple-chocolate brownie. The shrimp entrees included Shrimp Linguini Alfredo, Garlic Shrimp Scampi, Jumbo Coconut Shrimp, and more.

Red Lobster also kicked off a Create Your Own Ultimate Feast deal for Christmas 2018 and 2019. With this deal, you had to pick two shrimp classics, one lobster dish, and one seafood favorite from a list. And that was only the main course! The deal also came with a side dish, salad, and all-you-can-eat Cheddar Bay biscuits. When it comes to a hearty yet affordable seafood meal among family and friends for Christmas, Red Lobster might be the place to order at.

Since Red Lobster has been consistent with their holiday deals, they’re likely to have something in the works again for this year’s holiday season.

Red Lobster is known for offering a 10% Military Discount, Monday through Sunday. You may remember their Military Monday program, which only offered the discount on Mondays, but most locations will honor the 10% discount if you show your military identification card. Active Duty and Veteran military are eligible. Veterans Day is another time of the year that Red Lobster often offers discounts, as well as a free appetizer or dessert.

So, what about senior discounts? Red Lobster does not advertise a senior discount like they do for military personnel and Veteran’s Day, but some outlets may choose to offer one, according to SeniorLiving.org. Simply call and ask your local restaurant, and they should be able to provide you with available senior discounts.

In addition to coupons, Red Lobster always has unbeatable daily specials and Happy Hour discounts. Currently, the restaurant is offering the following specials:

When you’re ordering from Red Lobster, don’t forget to check what day of the week it is. You might be able to avail of one of their daily specials. The daily specials at Red Lobster run from Monday to Friday, with a different “spotlight” meal per day. Here’s a run-through of their specials:

All of these specials come with either one or two sides for a full meal. Best of all, they’re not for dine-in only – you can take advantage of them even for pick-up or delivery. Their Two for Tuesday special can make for a great date lunch. And if all you want to eat is shrimp, mark your calendar for next Monday!

Some Red Lobster branches have weekly specials on appetizers and drinks during Happy Hour. There’s no specific time listed on the Red Lobster website, but the usual schedule for their Happy Hour is from 3 p.m. to 6 p.m. Although prices can vary, they’ve occasionally offered $4 house wines and $3 draft beers before with $5 appetizers. To learn more about it, check out our Red Lobster Happy Hour page.