This website is not associated with Pollo Regio Menu

Pollo Regio is a Mexican restaurant that once started in Monterrey, Mexico, and now has several restaurants in the United States. The restaurant’s menu mainly includes salsas, tacos, nachos, burritos, quesadillas, their famous Mesquite-grilled chicken. They deliver to customers the unique taste of home-style cooking, and nothing beats Pollo Regio menu prices.

Below is a full list of the latest Pollo Regio prices.

What time does Pollo Regio open?

Pollo Regio opens at 10:00 a.m. Monday through Sunday. You can also browse through their website to verify their opening hours based on your location.

What time does Pollo Regio close?

Pollo Regio closes at 10:00 p.m. on Mondays, Tuesdays, Wednesdays, Thursdays, Sundays and 11:00 p.m. on Fridays and Saturdays. Check your nearest location to verify.

What is the most popular food item on Pollo Regio’s menu?

The most popular food item on Pollo Regio’s menu is their Mesquite-grilled chicken.

Does Pollo Regio only offer chicken?

What types of tacos does Pollo Regio serve?

Pollo Regio serves up a variety of tacos, including:

Does Pollo Regio have a salsa bar?

Pollo Regio has a salsa bar for dine-in customers only. 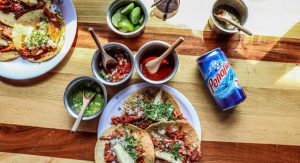 Is there a kid’s menu at Pollo Regio?

Pollo Regio does have a kid’s menu.

What does the kid’s menu include?

To learn more about Pollo Regio menu prices, check out their website.