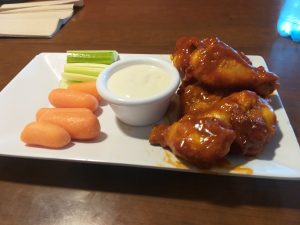 Like Pizza Hut pizza, its chicken wings are packed with salty, saucy flavor, so offering them together seems like a match made in savory heaven. As one of the top pizza chains, Pizza Hut knows just how to satisfy customers’ cravings, and their traditional-style chicken wings seem to hit the spot for wings fans across the globe.

Interestingly, about 50 years ago, chicken wings were considered “throwaway” cuts, so they were used in stocks and broths or just tossed out. There’s some debate in the fast-food world about which chain is responsible for changing the reputation of the chicken wing, but the impact has been so astounding that there have been chicken wing shortages in the US. That’s quite a turnaround.

Pizza Hut introduced wings to the menu in 2003, simultaneously rolling out their concept of a Pizza Hut/Wingstreet combination. Because they offered fried wings instead of baked wings, they earned a reputation for serving flavorful, fresh wings. In 2014, Pizza Hut opened the combo-concept to all of its locations across the US.

It’s no surprise that pizza lovers double as wing lovers – both are salty, savory, greasy foods excellent for social gatherings, game days, dine-in, or delivery. They both pair well with cool creamy sauces like ranch, blue cheese or picante sauce. This was a brilliant move for the franchise because over a quarter of their customers now add chicken wings to their pizza order.

Pizza Hut has more than 13,000 locations worldwide, but not every location offers the same flavors. Overall, the franchise offers 10 distinct sauces and flavors.

I tasted Pizza Hut chicken wings at a dine-in location in Mexico, and I asked to sample whichever flavors they offered. This location only served Buffalo Mild and Honey BBQ, so I ordered 12 wings with six in each flavor. I also ordered a large pizza (half pepperoni, half cheese) with the cheese-stuffed crust. I had to know how the flavors all worked together. Plus, I had my three kids with me, and if it’s one thing that makes my kids happy, it’s a table spread out with lots of food options.

We were served six wings first – the Honey BBQ flavor. It was served with the normal celery and carrot sticks, and a side of blue cheese. I noticed first how fresh and juicy the wings were. Piping hot and dripping with sauce, I drenched them in blue cheese for a flavorful first bite. The Honey BBQ sauce was sweet and tangy. Both flavors worked well together, and the sauce didn’t overwhelm the flavor of the chicken. The sauce had a bit of a spice to it, but wasn’t “spicy.” My nine-year-old ate one and washed it down with a nice Fanta orange soda. The chicken itself was cooked perfectly. Each piece was juicy and tasty. Sometimes, in an order of wings, a couple of them are overcooked, or the sauce doesn’t stick well to the chicken. This wasn’t the case here. These wings were well-cooked and saucy. 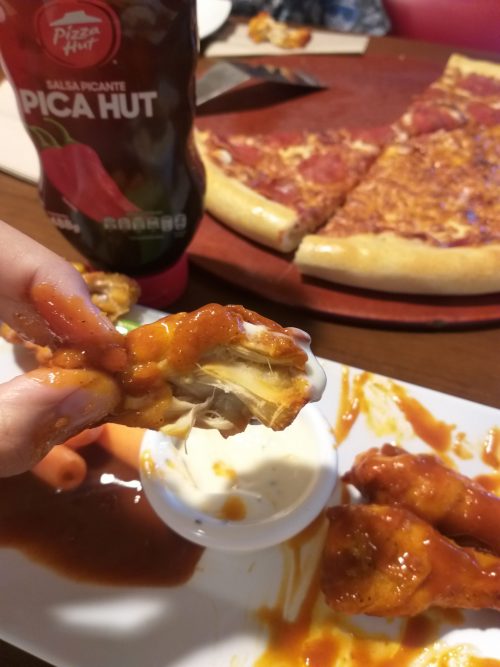 Next came our pizza, which my kids devoured pretty quickly. I ate one piece of pepperoni pizza, and I added the Pica Hut Picante Sauce to my piece to mimic more of a buffalo wing flavor. Then I got a kick out of the fact that my next six wings tasted almost exactly like the Pica Hut sauce (which is not “pica” at all). So it made a nice segue, I suppose.

My Mild Buffalo Wings were also delicious, and they weren’t spicy at all. My first impression was that they tasted remarkably similar to the Pica Hut sauce, so I tried a side by side taste test. My verdict was that the buffalo sauce is either similar or the same as the Pica Hut Sauce. I prefer chicken wings to be spicy, but since none of the sauces available were spicy, I doused these in blue cheese, and I did enjoy the flavor. The mild buffalo sauce (like the Pica Hut sauce) is like mild salsa, similar to a Valentina sauce. It’s tangy and flavorful, and it complements the juicy chicken well.

Pizza Hut’s chicken wings aren’t a healthy meal choice, but when you’re comparing it to pizza, their nutrition is similar. So if you’re going to Pizza Hut anyway, you might as well indulge. Some buffalo wings are lower in calories, carbs, and fats than pizza, depending on the sauce, but the nutrition in either one depends on the serving size. Either way, both are high in refined carbs and unhealthy fats. The best way to reduce this is by ordering the naked wings, but that’s not as much fun.

Being able to purchase wings and pizza in the same location is a plus for me. Everyone in my family eats both, and we all love a lot of variation in our meals. The prices are already comparable to other wing restaurants, but to sweeten the deal, Pizza Hut offers “Wing Wednesday,” a deal that is exclusively for online customers. The franchise also offers several other coupons, sales, and combo deals that you can use for your next game day or party, when we all get out of quarantine, of course.

I’ll go back to Pizza Hut for their chicken wings and pizza combo. It’s a sweet deal and feeds the whole family for a decent price. The flavors are savory, the meat is juicy, the service is always great, and with so many locations available internationally, it’s a restaurant we can count on for taste and quality.

Which Pizza Hut Wing sauces are available where you live? Which one is your favorite? And who else orders cheese-stuffed crust pizza with their wings? We’d love to hear your thoughts in the comments below.