You are here: Fast Food Prices > Mooyah vs. Smashburger vs. In-n-Out Burger

If you are a burger lover congratulations! You are a certified American. For a country that consumes 50 billion burgers a year and has declared a specific day as “National Burger Day”, the U.S. is definitely a burger-loving nation.

While there’s a McDonald’s, a Wendy’s and a Burger King that’s battling it out in the fastfood burger scene, there is another war waging in the Gourmet Burger battlefield. Who will it be; Smashburger, Mooyah or In-n-Out Burger. Let’s compare meats but first let’s look at their backgrounds. Ladies and gentlemen, here are the three contenders for “Best Gourmet Burger”.

Smashburger is a gourmet burger restaurant that started in Denver, CO in 2007. Their menu focuses on burgers with your choice of toppings along with chicken sandwiches and salads. Smashburger customizes their burger presentation according to regional preferences. Along with their main menu they also serve a variety of sides and desserts. As of this date, Smashburger already has more than 300 locations in 32 states and 5 countries. 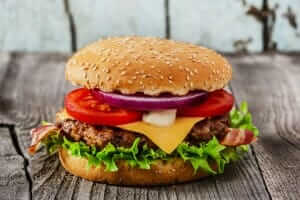 Mooyah is a casual burger restaurant which started in Plano, TX in 2007. Their main menu consists of burgers, fries and milkshakes. Today, Mooyah has over 72 store locations through the Unites States.

In-n-Out Burger is the veteran among the three gourmet burger joints which started in Baldwin Park, CA in 1948; serving burgers, fries and milkshakes along with a secret menu of triple patty-triple cheese and quadruple patty-quadruple cheese burgers. In-n-Out Burger is now headquartered in Irvine with 302 locations primarily in the American Southwest.

All three are basically selling the same things; obviously but, it’s not only about the burgers. It’s about the whole burger experience. So let’s have a run-through of what happens when you visit each one.

First of all “Mooyah” is so nice to say. When somebody says “Mooyah” to you, it looks as though that person is blowing you a kiss. It’s so close to Mwah! The ambience is like something Michael J. Fox will go to in the “Back to the Future” movies. For the burgers, the first thing that you will notice is that the buns really smell good since they are baked fresh every day. However, since you are allowed to put as much veggies and sauces on the burgers, you’ll have the tendency on losing out on the beefy taste.

They have a special sauce that you can try. Some like, it some don’t. Burger-wise, Smash and In-n-Out are probably better but Mooyah more than makes up for it with their milkshake because it’s so thick, sweet and creamy. Anyone will regret going to Mooyah if they don’t go for the burger-milkshake combination because that’s what the “Mooyah Experience” is all about.

The first thing that everyone appreciates at Smashburger is the beef. Fresh Angus beef is so tender and juicy. Even if you pile up so many sauces and veggies, the taste of Angus beef always stands out. The use of butter instead of oil makes the Smashburger patties even juicier and tastier. How can you ever go wrong with butter? That’s the secret to French cooking. Another thing that’s noticeable with the Smashburger patties is that they are cooked all the way through unlike other burgers that have some raw, semi-cooked parts in the middle. Medium rare is good on steaks but for burgers, they are always better well-done or medium-well.

Smashburger’s trademark of smashing or pinning the patty to the grill, to make sure that all parts get the right amount of heat, gives their burger an even cook. Customizing their burger’s taste per region is very brilliant. That way, you can drive across the United States and get a new refreshing version of a Smashburger.

In a way, In-n-Out has already gained a huge advantage with their Secret Menu of over-sized burgers because if line all three of them up side by side; the big eaters will always prefer In-n-Out over Mooyah or Smashburger anytime considering that their patties are tender and juicy as well. And besides, cheese lovers might prefer In-n-Out’s version better than the other two because, in terms of cheese-to-burger patty ratio, In-n-Out Burger’s exceeds the bread and the patty that you can already taste the richness of the cheese before even taking your first bite.

If you go to Mooyah, get a cheeseburger-milkshake combo. If you are after the taste of the beef, go to Smashburger. If you want to be filled to the brim, go to In-n-Out Burger. The average American eats 4.6 burgers a month. You can cycle these three gourmet burger joints on a one-burger-per-week basis.