You are here: Fast Food Prices > The Money Race – Which Fast Food Restaurant is winning?

The food industry being one of the largest industries on the planet is because of a simple reason that food is one of the basic needs of human apart from clothing and shelter that has a faster consumption speed than anything else. The limited service industry in the restaurant business or the commonly known as fast food industry is gaining grounds. As the shift in the generation and ideology in the human mind-set is quite visible about how and what are the perceptions and expectations of the next generation, the fast food industry has grown considerably in the last two decades or so. Before that none of the fast food chains were even known so widely and had such a large acceptance. 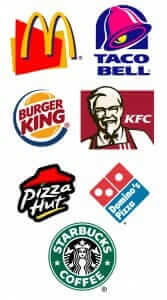 Intense competition has been seen throughout the last decade in the fast food chains and brands like McDonalds, Taco Bell, Burger King, KFC, Pizza Hut, Dominos, Starbucks, Café Coffee Day, etc. and many such fast food joints have been seen across the planet taking over the restaurant business. The full service restaurant is now only for those who wish to really have meals, but the next generation or so called the coffee culture generations wants to gossip more than eat and hence is acquainted well to the limited service restaurants. Which food restaurant is giving the best of the experience and which of them satisfied their customers the most is a matter of concern and who is really winning the hearts is what matters to us. Well, in this race and competition to win the hearts of people across the globe within the purview of fast food restaurants is being won by Burger King. There are many strong points of this restaurant chain and strategies which are making it one of the best and most liked fast food restaurant and that it does have potential to grow itself more and get to new highs of the industry.

Burger king has been putting up a strong performance always as against its competitors. Its profit recently increased by 6.9% as against that of the last year quarters. Even after adding up more than 500 locations this year across America, Middle East, Africa and Asia Pacific the profit margins have still surged over 2% as every year. Even if one excludes the franchised restaurants there are 300 plus company owned restaurants which somehow represents the 19.3% growth as against the quarter in the previous year.

The reason of Burger King and its super growth is the strategies and the decisions that the company management takes for the business. Their primary strategy involved that be there limited products on the menu but they should be so innovative and mouth-watering that even the in store or the drive through experience of the customers will be enriched and they get satisfied with whatever they purchase and their satisfaction level is optimum. This helps them to negate the impact of the competition from those like McDonalds or that of Taco Bell which has many food products on the menu but are running due to the cheap availability or one or two famous items. The goodwill of the brand Burger King has went up only because of the same reason that all the menu items are equally good and awesome to eat. During the current quarter it was seen that the Big King Sandwich enjoyed its success continuously and even the company introduced a new Spicy Original Chicken Sandwich which soon become the top choice of the people across the United States.

What Strategies Make Burger King The Real King of The Fast Food Market?

The store gives variety of schemes to its customers and one of the exceptional and most awaited schemes is that of the King Deals which deliver equal value of money and points to the customer on every purchase. Not only this but to drive the innovative menu style the company has been constantly revising their menu and putting up new things for the people to try wearing off the old ones as and when needed. For example in the current quarter the company has put up Rodeo Burger and Rodeo Chicken Sandwich. Moreover the company also strategizes its franchisee operations by giving them the probability of good profits and simplified initiatives to go ahead with.

One of the things that Burger King is good at is that it realizes the customer needs immediately and makes the necessary changes instantly in its food item. They are really that flexible. For example this quarter they twisted their classic cheese burger into an extra-long BBQ Cheese Burger. This definitely attracts the consumers to try it out. There are people who want the same taste and same products on the go. But there are many who want the same product in a new way always. So this kind goes quick changes to the response of consumer demands are the types of small strategies that Burger King is expert at and hence maintaining their goodwill with a high profit potential.

There are a competitors like Wendy’s which is competing fiercely with the Burger King and then there is a McDonald’s at every important and busy street in the world somehow. So how does Burger King compete with them is another trivia? Though McDonald’s gets good share of customers the sales have plumped down to record levels. Even the satisfaction levels of customers have been the lowest since they were born. This automatically gives the market leaders an edge over the ongoing competition and that is how Burger King gets more of the sales and traffic into their stores.

This brings us to a conclusion that in this money race, Burger King is the one which is doing really well in the fast food market due to above reasons. The company’s focus on their menu and the franchise model policies both are actually working for them. If investments come in their way at this time then it could be a win-win situation for both the investors as well as the company.