When you hear “KFC”, it’s always about chicken. Unlike burger fast food joints that offer chicken variants alongside their traditional burger offerings, KFC doesn’t do that. After all, KFC stands for Kentucky Fried Chicken.

The Kentucky part only now refers to its birthplace, because people all over the world are enjoying the crispy chicken goodness that is KFC. But in general, the FC part puts its focus on the rightful star of the KFC menu: the fried chicken. 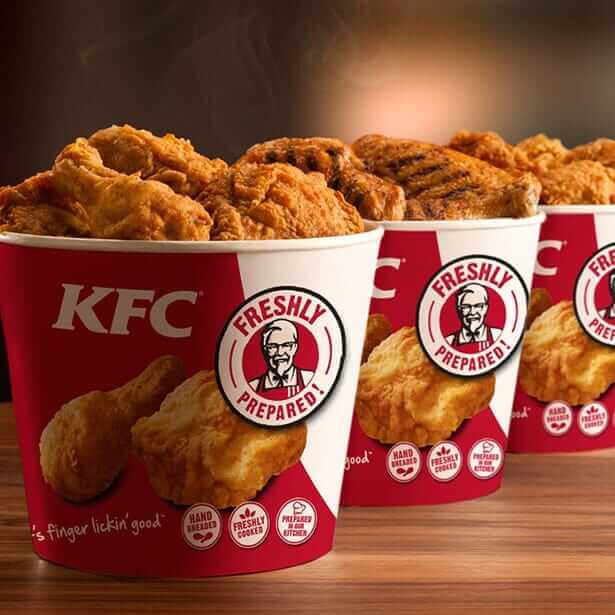 While the Original Recipe® Chicken will always have its diehard fans, nowadays people have a wider variety of options to choose from. There’s the Extra Crispy™ variant, with a tender juicy chicken middle wrapped in a super crunchy and flaky breading. The chicken is fresh, that’s one reason for its great taste. But they also coat it in their signature breading seven times, and sift it seven times. That’s the kind of meticulous preparation that makes the Extra Crispy™ unique.

Then you have the Extra Crispy™ Tenders. The folks at KFC take tender marinated strips of pure breast meat, and hand bread them not just once but twice with the secret seasoning blend. So what you get is chicken that’s really super-juicy inside and super-crispy outside.

A lot of people have also fallen in love with the KFC Hot Wings. It shouldn’t be a surprise at all. After all, on the inside the chicken meat is marinated with chili peppers and spices. After that, it’s fried to a very crispy golden color, and the perfection is absolutely sauce-less.

And if you want to try it without the F in KFC, the Kentucky Grilled Chicken® is so scrumptious! You can’t even hope of duplicating the results in your own backyard grill. Firstly, the chicken meat is marinated and seasoned. Then it’s grilled ever so slowly so that the result is a perfection that’s so juicy you’ll be asking for more.

The traditional way of enjoying KFC chicken is to go get a bucket and share it with friends and family. But now with so many people on the go, sandwiches are becoming much more popular. With KFC, you have two main options in Chicken Sandwiches. And no, there’s no burger option!

The first one is called the Doublicious. Maybe the name is meant to imply that it’s twice as delicious as the other chicken sandwiches. But they’re not actually exaggerating all that much. After all, the meat is a boneless breast filet. It’s very juicy, and it’s also breaded with the timeless KFC Original Classic. But this time, the chicken is accompanied delicious bacon, a super sauce, and Monterey Jack. And all of these are wrapped in between a couple of Hawaiian buns known for their softness and sweetness.

The other one is called Chicken Littles®. The little in the name doesn’t really refer to its taste, because it’s scrumptious. Perhaps it refers to the calorie content, which is a measly 310 calories. Some half-size salads may actually have more calories than that!

In any case, the Chicken Littles® are sandwiches featuring chicken tenders that have been freshly baked. It also comes with pickles and mayo, all wrapped in a sweet bun. When it comes to deliciousness, there’s really nothing little about it. Even a small bite will convert you into a fan.

KFC All Over the World

KFC is the most popular chicken restaurant in the whole world. They have outlets in more than 115 countries. That means that there are new items on the KFC menu that may only be available in certain parts of the world. After all, regional differences result in particular preferences, and sometimes a new area-specific menu item means that local executives are ever mindful of what their customers want.

Take, for example, the KFC Big Boss Burger. Ever since McDonald’s introduced its Big Mac, a lot of competitors have also begun their own versions of the iconic sandwich. In this case, the KFC offering is vaguely familiar. There’s the sesame seed bun, of course, and there’s a middle bun too. Then there are the somewhat familiar elements like the cheese, pickles, and a secret special sauce. Perhaps the only notable difference here is that instead of beef patties, with the KFC you get chicken instead. With the Big Boss Burger, you get a couple of crispy and breaded chicken fillets with 100% white meat.

Then there’s the Zinger Reloaded Burger available in areas much farther east. It’s a new twist on the classic KFC Zinger sandwich. Here, a perfectly fried chicken fillet is accompanied by crispy onion rings. It’s topped by savory special sauce and served in an oblong bun.

But whatever variant you may prefer, and whichever KFC location you go to, there’s only one constant. When it comes to chicken, KFC is still the name most people think of!