You are here: Fast Food Prices > Krystal: Southern Food At Its Best

Coca Cola, fried green tomatoes, the Graceland mansion of Elvis Presley, chitlins, mint juleps, and pecan pie, are not the only reasons why a person goes “Down South” below the Mason-Dixon line. Krystal is also one of those reasons, where you can sample those unusual square shaped burger patties called “sliders” to the uninitiated Yankee, served on a steamed, hot bun with pickles, mustard and diced onions.

Louisiana, Alabama, Florida, Kentucky, Mississippi, South Carolina, Tennessee, Virginia, Arkansas, and Georgia proudly have Krystal restaurants operating in their states that are either franchises or company-owned.

Krystal’s menu has expanded to include a 100% Angus beef, full-sized hamburger for heftier appetites (the Big Angus Burger) and the Krystal version of small-sized hotdogs endearingly known as “pups.” View the latest Krystal prices here. 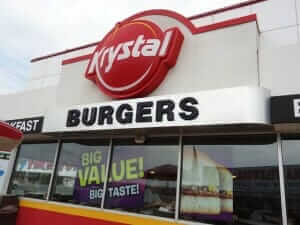 Krystal restaurants host the famous “Krystal Square Off,” a burger-eating contest that had, in 2007, a champion named Joey Chestnut who finished 103 Krystal sliders in just eight minutes.

Founded by Rody Davenport, Jr. and J. Glenn Sherrill in 1932 in Tennessee, Krystal was the partners’ answer to the intense economic upheaval known as the Great Depression: a clean restaurant which had good meals served with courtesy at an affordable price.

Krystal has been in operation since 1932 in Chattanooga and moved to its present corporate headquarters in Atlanta, Georgia only in 2013. Krystal is the oldest operating hamburger chain in the South and the 8th oldest in the U.S.

Cake doughnuts were breakfast and dessert items in Krystal restaurants during the ‘50s and kettle fried chicken was offered between 1970 and 1986, sometimes sold as stand-alone additions to the hamburgers.

Krystal’s diverse menu is well-known, including the popular country breakfast which one can have made to order egg and meat sandwiches, biscuits, and other favorite Southern foods. Of course there’s the famous Scrambler which now comes in four varieties: Original, Sausage Gravy, Pancake, and Low Carb.

The Original Scrambler is actually a traditional breakfast in Southern states that has been “stacked” or layered in a (Styrofoam) cup: scrambled eggs, Jimmy Dean sausage, grits, and American cheese.

And for the high-protein sibling of the Original Scrambler there’s the Four Carb Scrambler, a stack of fresh scrambled eggs, American cheese and Smithfield bacon fried to a crisp.

Krystal’s Pups are pint-sized hotdogs packed with delicious flavor and savory aroma, just like their big brothers. You can have these Pups four different ways:

Krystal’s Sides have all the distinctive flavor of Southern food that makes eating such a pleasure:

Krystal’s interactive website supports the innovative application of mobile computing. The Krystal Locator has been put up for customers who want to satisfy their Krystal Kravings if they are in the Southeast US. Krystal is one of the very few food chains today which encourage active participation in the community.

Krystal has partnered with the National Military Family Association’s Operation Purple™ to support military families, served up thousands of Krystal sliders and Krystal Chiks to the first responders of Hurricane Isaac in Gulfport, Mississippi, and has sent their Krystal Cruiser for a tornado clean up in Mobile, Alabama.