You are here: Fast Food Prices > KFC’s Double Down is So Back

On April 21, KFC brought back one of its most bestselling–and controversial–products ever: the Double Down.

KFC of course has always been known for its chicken, but when it introduced the Double Down four years ago, the product was met with a lot of controversy. The nutritionist’s nightmare, the Double Down is basically fried bacon and melted cheese sandwiched between two deep-fried chicken fillets. This caused a lot of curiosity back then, because KFC basically replaced the usual burger buns with actual chicken, and deep-fried at that. The chicken treat topped the calorie charts at 540 calories, and with all the deep-fried goodness, it’s not surprising why the health-conscious were shaking their heads. 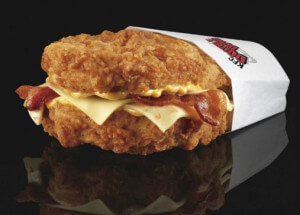 Back in 2010, the Double Down was launched to the delight of the market, especially those who just love the chicken goodness that KFC brings. Add to that the flavors of the bacon and the cheese, and the result is just heavenly. The demand is clearly there, because during the first month of its introduction in 2010, KFC was able to sell more than 10 million Double Downs. And if you use the market’s reaction as the test of any product’s goodness, then the Double Down most definitely passed – with flying colors.

Today, four years later, KFC is bringing the crowd favorite back, but for a limited time only. The Double Down has actually been available in select KFC restaurants in the US and abroad, but not all KFC restaurants carried it. Recently in January, it was reintroduced in KFC branches in the Philippines, together with a ‘Junior Double Down’ for smaller appetites. Other countries that carried the Double Down after that 2010 launch in the US include Canada, New Zealand, Australia, Malaysia, Japan, and South Korea. But it never appeared nationally in the US again, so this means that this is actually the first time in so many years that KFC is marketing the product on a nationwide scale.

Rick Maynard, a KFC spokesman, mentioned that this reintroduction of the Double Down for a limited time only is like another trial run. After all, it’s been four years, and who knows how America will react this time.

In four years, the market may have changed and many factors have changed as well. This is why KFC is adapting its strategy of reintroducing the product to the current trends we are seeing in the market today.

As a strategy to introduce the Double Down to an internet-savvy market, KFC has come up with the #DOUBLEDOWNDARE. This dares Double Down fans to “compete in a series of four dares o prove you’re a Double Down super fan.” There are a total of 4 challenges, and 3 winners will be chosen from each challenge. If you win a challenge, you win a cash prize of $100. And for extreme bragging rights, KFC will award the ‘Double Down Super Fan’ not only with $500 but with a Double Down Party that the winner can hold at his or her local KFC, together with 50 close friends and family.

The challenges are very much designed to maximize the use of social media. The first challenge for instance is one that requires participants to take the most creative Double Down selfie, using the hashtag #SELFIEDARE. The second challenge is about creating the most unique Double Down dance move, with the hashtag #DANCEDARE.

Going to the Double Down Dare website http://www.kfc.com/challenge/ will show you the unique entries that made it to the winner list of each challenge, cementing the Double Down as a cult favorite and as a product with a lot of following.

The Double Down Frenzy

Clearly an innovative–and for some, even disruptive–product, the Double Down has caused a lot of frenzy in the markets that it has been introduced in. Its success in global markets is proof that the concept is something that appeals to many, even if there are many naysayers and critics surrounding the product’s obvious success.

With the Double Down now reintroduced to the US market for a limited time, Double Down fans can now head to their KFC stores and have their taste of a product that has been missing in action for so long. As for the naysayers? They can shake their heads all they want, but the Double Down is here to stay, at least for the time being.