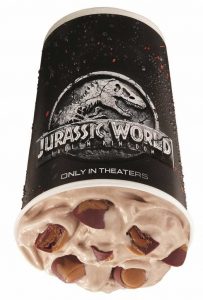 DQ’s favorite frozen treat is wildly popular, boasting a rewards club of over 4.3 million people. The Dairy Queen Blizzard is made with thick, soft-serve ice cream and a range of customizable mix-ins to fit your every craving and desire. While some Blizzards remain on the permanent menu, some are limited-time items or, in the case of the Jurassic Chomp Blizzard, a promotional item that 90’s sci-fi fans couldn’t help but flock towards. If you had a chance to try this Blizzard, you’re one of the lucky ones. If not, check out what made this Blizzard special in our Jurassic Chomp Blizzard Review.

The Jurrasic Chomp Blizzard was available on the DQ menu during the summer of 2018 – the perfect time to release a frozen ice cream treat. In preparation for the premiere of Jurassic Park: Fallen Kingdom, Dairy Queen teamed up with the Universal Pictures franchise to offer the ultimate Jurassic Chomp Blizzard. You may remember that DQ previously partnered with Universal Pictures’ for Jurassic World in 2015. Jurassic Park fans loved that the treat was served in Jurassic Park-themed cups, with designs varying from size to size. It was similar to the 2015 Jurassic Smash Blizzard with the peanut butter and chocolate mix, but this time, the franchise made it more basic by changing the ingredients and only using three components instead of five.

At first glance, you can’t help to be a little excited to see the fun Jurrasic Park cups. This was not originally part of the release, but because the Jurassic Chomp became the official Blizzard of the Month during the month of the movie’s release, we all got this extra surprise. The colossal chocolate-dipped peanut butter bites were indeed colossal, and there were more than plenty in each bite.

The first bite was sweet and creamy with the perfect blend of flavors. The vanilla-based ice cream mixed with chocolate syrup balanced the choco-dipped peanut butter bites. The candy bites had just the right amount of sweet and salty, and a bit of a soft crunch when you took a bite. I loved how the hard candies complemented the soft-serve ice cream. You would have thought I was a dinosaur myself the way I devoured mine!

Despite the similarity in name and flavor, the Jurassic Chomp was different from the Jurassic Smash Blizzard, which was made of “smashed” peanut butter cookies, chocolate chip cookie dough, peanut butter, and choco chunks.

Candy-filled ice cream isn’t one of the more healthy items to choose if you have dietary restrictions, but it’s good to indulge every once in a while. I’d recommend ordering the Jurassic Chomp Blizzard or any delicious DQ Blizzard in a 6-ounce Mini or 12-ounce Small. This will help you keep the trans-fat and calorie-count lower.

My favorite Blizzards are the ones with chocolate-covered peanut butter candies. The Reese’s Peanut Butter Cup Blizzard is my favorite, and any variation of that gets a big yes from me. I love the candies on their own, but I especially love them paired with soft-serve ice cream. While the price may seem high, the Jurassic Chomps are worth it for the flavors and the nostalgia.

The Jurassic Chomp was perfectly-blended, sweet, and covered in the delicious choco-dipped peanut butter bites. It was only around for a limited time, but could we look forward to another release for the next movie Jurassic World: Dominion, in 2022? Join DQ’s Blizzard Fan Club to get a heads up.

This is the nutritional information for a medium-sized Jurrasic Chomp Blizzard.

You could purchase a small for $3.59 or a medium for around $5. The prices are pretty steep for ice cream, but because it’s a limited-time promotional item, I can understand. If I only purchased one per Jurrasic Park movie release, it wouldn’t exactly break the bank.