You are here: Fast Food Prices > Jamba Juice vs. Smoothie King – The Battle of Smoothie Shops

Smoothies became popular in the United States in 1960s when ice cream shops started selling them. They are usually marketed as a healthy drink because most of the time they’re created using fresh fruits. Although most smoothies are healthy, they also tend to be loaded with sugar so if you are watching your carb intake, you should probably avoid them.

What’s so special about smoothies? Well they tend to be a refreshing drink because it’s cold and usually loaded with vitamins and nutrients. Many smoothie shops now offer an energy boost in their smoothies, which consists of adding caffeine, taurine, green tea, whey protein or some other source of energy to the smoothie.

If you like to eat fresh fruits, then you are going to love fruit-blended smoothies. They have a full taste of fruit in a cold and refreshing form. So if you’re tired of chewing your fruit or just want a little change in your life, try a smoothie from Jamba Juice or Smoothie King. 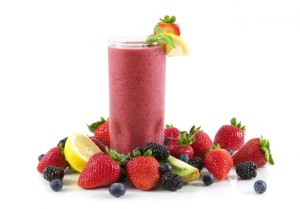 Although Jamba Juice has only existed for a little over 2 decades, it has already made its mark in the world. A healthy lifestyle guru, Kirk Perron, originally started the restaurant in 1990.

Today, there are over 750 Jamba Juice locations in 19 countries. The restaurant has expanded tremendously over the years and part of it is due to consumers being more health-conscious and favoring healthier and more natural food choices.

If you are watching what you eat or in other words, if you do not want to ingest a bunch of calories and carbs into your body, then they also offer “Make it LightTM” smoothies that promise to be 1/3 few calories, carbs, and sugars than the classic’s.

If you’re ready to try one of these delicious smoothies, then prepare your wallet, as Jamba Juice prices can be a little higher than you might be used to paying for a smoothie.

Smoothie King is similar to Jamba Juice in that they also sell fruit-blended smoothies. Like Jamba Juice, Smoothie King offers tons of flavors so you have a new one to try each time you’re there.

But they differ from Jamba Juice in that they offer add-ons to the smoothies called, Enhancers. Enhancers basically enhance the smoothie so it meets your specific needs or goals.

For example, if you’re feeling down and need some energy, you could try the Pure Recharge Enhancer, which includes natural caffeine and energy sources such as green coffee bean, berry, vitamin B12, and ginkgo biloba.

Are you preparing for a workout? Then you might try the Pre-Workout Enhancer, which contains L-Arginine, Beta Alanine, and caffeine.

So who wins this battle? You might think it’s a simple black and white answer, and you would probably be right.

Although taste is highly subjective, we think that Jamba Juice has better-tasting smoothies while Smoothie King offers functional smoothies.

If you just want a smoothie to settle your craving, then go for Jamba Juice, as you will not be disappointed.

But if you are looking for a smoothie that can be customized for your specific needs or goals, then select Smoothie King. Smoothie King has smoothies for people that need things such as energy, pre-workout boost, or a diet smoothie.

And there you have it — two great smoothie shops that offer tasty smoothies for everyone. We would suggest that if you have not tried these yet, that you try them both and decide which one is the better choice for you.

Even though we only mentioned Jamba Juice and Smoothie King in this article, we know that there are some other great options out there and we would love to hear what you think and what you favorite smoothie place is.