You are here: Fast Food Prices > Healthy and Delicious Meals from the Pita Pit

These days, if you wanted a healthy meal you could drown yourself in the rich variety of choices. Just about every restaurant and fast food chain, even McDonald’s, is offering some sort of healthy menu item. One of the chains that did it first, an entire decade ahead of the pack, was the Pita Pit.

The Pita Pit focuses entirely on two ideas: good tasting food and fresh, healthy ingredients. It might all sound like another go-green business but you have to recall that the Pita Pit was the pioneer of this idea and to this day their quality service and products are unmatched.

Where Subway and other “healthy” restaurants have failed, the Pita Pit remains as the go-to choice for students, dieticians, doctors, and health nuts alike. Even if you’re not so much into the whole “eating healthy” craze, the rich flavor of their good tasting food will keep you coming back for seconds.

The Pita Pit originated back in 1995 and its first branch opened in Kingston, Ontario, by business partners and friends John Sotiriadis and Nelson Lang. The branch was very close to the prestigious Queen’s University, making the store a common meeting ground for students. 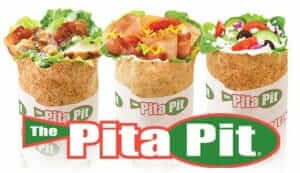 Franchising began in 1997 and the first few franchises began to litter the Canadian landscape. By 1999 the first branch of the Pita Pit marked its way into the United States. The Lebanese pita sandwiches were a great alternative to all the fast foods offering high amounts of calories, bad carbohydrates, fats, and junk food.

1999 was the year that the entire health craze began to take stride. Diet specialists were beginning to get noticed because of the Internet, bodybuilders were endorsing healthy meals as well, and even medical experts like doctors were beginning to voice out for people to change their eating habits.

It was a perfect time for the Pita Pit to arrive in the US.

By 2014 there are now well over 500 branches of the Pita Pit all over the globe. There are now branches open in the United Kingdom, in New Zealand, France, Australia, India, South Korea, and even in Brazil and Panama.

The Pita Pit is one of the fastest growing chains in North America, with new franchises and privately-owned branches opening every year. The rapid growth since 2011 estimates that another 500 branches will be open before the end of 2020.

There are generally four pita categories to choose from: the classic pitas, the famous pitas, the legendary pitas, and the breakfast pitas. Of all of these different categories here is a look at some of the most widely loved items:

The Babaganoush Pita is perhaps the most classic of the menu choices from the Pita Pit. Babaganoush spread is basically a Mediterranean spread of mashed, cooked eggplant sprinkled with spices and garlic. It is then mixed with a variety of toppings and sauce to make for one of the most delicious but surprisingly healthy pita sandwiches in town.

Another famous best seller is the Chicken Ceasar. It’s so good it has been listed amongst the Legendary Pitas of the Pita Pit. You get lean white chicken sandwiched in a traditional pita and is topped with your choice of Ceasar mix – one of the most suggested options is to top it with bacon, fresh lettuce, Parmesan cheese grates, and light Caesar dressing!

Lastly there is the Garden of Eden smoothie. That’s right – they also serve smoothies and the amazing fact is that their smoothies use 100% organic fruits and yogurt and have no sugar added at all. The Garden of Eden is a blend of apple-berry juice mixed with low fat frozen yogurt. You can also get this blended with extra protein or with double-fruits and you can also get it dairy-free!

There are generally four pita categories to choose from: the classic pitas, the famous pitas, the legendary pitas, and the breakfast pitas. Of all of these different categories here is a look at some of the most widely loved items:

“Fresh Thinking and Health Eating” is the motto that the Pita Pit lives by and it has taken them stride after stride into the halls of success.

The Restaurant Business Magazine included the Pita Pit in the Future Fifty list of fast-growing food chains in the world and noted that it was one to watch out for as it takes the world by storm with its iconic healthy but tasty pitas.

The Pita Pit also nabbed the top #1 spot in the small chain category in the Franchise 500 list of 2009. By 2014 it took a spot in the Foodservice and Hospitality Top 100 list.