You are here: Fast Food Prices > The Hands-Down Best Milkshakes in the U.S.A.

Ah, the BEST milkshakes. Icy cold, smooth ‘n’ creamy, thick ‘n’ sweet. As American as apple pie and gas-guzzlin’ SUVs, the perfect accompaniment to a big, juicy burger and a decadent dip for French fries. He who doesn’t adore a milky, shaky treat now and then is a suspicious fellow indeed. 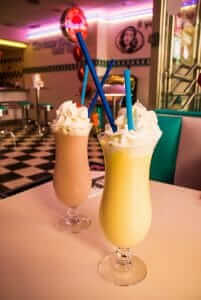 The name “milkshake” has its humble beginnings in 1885, when the term referred to a thick, whisky-infused eggnog-type drink that was entirely sturdy and surely unpleasant. But happily, things shifted dramatically by 1900, when the term “milkshake” conjured up visions of a sweet, innocent treat made with milk and flavored syrup and shaken by hand with ice, hence the name. Within a decade, mechanical drink mixers were standard at soda fountains, and ice cream became the base of the milkshake, which was thick and rather lumpy. When the electric blender was invented in 1922, the modern milkshake was born: Exactly thin enough to be sucked through a straw but thick enough to consume with a spoon. Whipped, aerated, frothy. Mmmmm.

Nowadays, you’re hard-pressed to find a place that doesn’t serve milkshakes, but the quality often leaves a lot to be desired. If you want a real-life, down-home, all-out milkshake, you’ve got to do a little digging, which we’ve done for you so that you can go right out and enjoy one of these top five best milkshakes in Fast Food Country.

Did you know that the founder of DQ actually invented soft-serve ice cream? It’s true, and it’s soft-serve that revolutionized the field of shake-making. It’s no wonder, then, that DQ has one of the best milkshakes you’ll find this side of the Mississippi, whichever side you’re on. DQ shakes are thick and rich and come in a range of delectable flavors, including caramel, peanut butter, and banana.

This is how you Sonic: You order a milkshake, you consume said milkshake, and you declare it one of the best milkshakes you’ve ever had. This baby is luxuriously smooth and silky, perfectly sweet, and available in all sorts of flavors. And when we say “all sorts,” we mean all sorts. Chocolate-jalapeno milkshake, anyone? Lemon pie? Pineapple? Sonic has you covered.

Chick-Fil-A calls their shakes “Icedream,” and it fits: Icedream is thick and frothy and icy cold. It’s usually available in chocolate, vanilla, cookies & cream, and strawberry, but in the summertime, they offer a peach shake that is seriously out-of-this-world dreamy and a sweet shout-out to their Georgia roots.

The Frosty is a legendary treat, and it’s so thick you really have to eat it with a spoon until it warms up and thins out a bit. Located somewhere between milkshake and soft-serve, the Frosty  is the perfect chaser for your burger, and it’s excellent for dipping your fries in (if you’re into that sort of thing.) Although the Frosty is generally only available in chocolate and vanilla, it’s made with real milk and cream and is a wholesome, heat-busting accoutrement to a sweltering summer day. 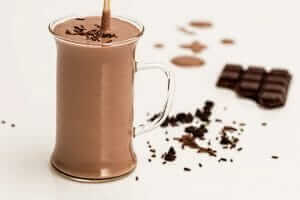 Obviously, one person’s idea of the best milkshakes in America is different than another’s. With so many establishments serving up milkshakes as part of their usual fare, it’s hard to know which is really and truly the best milkshake ever. If you have an opinion on this very important matter, we’d love to hear it, and so would our milkshake-lovin’ fans!