You are here: Fast Food Prices > Which Fast Food Places Are America’s Favorites?

Americans love their fast food about as much as anyone can love anything. More than 232,000 fast food restaurants in the U.S. employ over three and a half million people and raked in almost $300 billion in 2015.

The fast-food industry is making a killing, and doesn’t it seem to be slowing down any time soon. Eighteen percent of Americans dine on fast food several times a week, with 22 percent noshing on it several times a month, according to Statistica. So where are all of these people spending their fast food dollars? To find out, we looked at the annual QSR 50 Ranking to see which fast food companies raked in the biggest shares of the market in 2015. 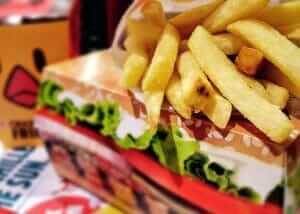 With nearly 13,000 stores in the U.S., it’s no wonder McDonald’s ranked first for the biggest market share in 2015. But in the years leading up to this coveted spot, McDonalds’ kingdom was in decline. Under CEO Steve Easterbrook, however, the Home of the Big Mac made it easier to customize your order and started offering all-day breakfast, which accounts for some of the increase in revenue, according to analysts. McDonald’s also brought some healthier choices to the table, including Cuties, those darling little clementines that are so easy to peel. Now holding strong at number one, The Arches appear to be golden once again.

With fewer than half the stores that McDonald’s has, Starbucks raked in the second-highest revenue in 2015, thanks to their over-achieving ways and constant development of new, festive drinks to mark just about every occasion, from the Frappula offered around Halloween to the bright pink Strawberries & Cream Frappuccino they pull out around Valentine’s Day. Heck, they single-handedly turned pumpkin spice into a pop culture icon. Their edible offerings, from dainty cake pops to fancy-pants breakfast sandwiches, account for a lot of their sales, and their loyalty app—which enjoys 17 million users—and their Mobile Order & Pay program that allows you to order ahead doesn’t hurt, either.

After some shaky footing, Subway ultimately emerged from their Jared Fogle scandal seemingly unscathed to reach third place in sales, although the infamous Fogle was partially to blame for a $400 million slide in sales once the news of his proclivity for child pornography went public. But Subway’s healthy offerings attract millions of diners who enjoy its premium ingredients and prefer that their fast food not be infused with high-fructose corn syrup and artificial flavors and colors, which Subway has nixed nationwide.

Thanks to a $900 million surge in sales in 2015, the King of Burgers moved up to the fourth spot of top fast food joints. Culling some unproductive stores helped drive the gains, and Burger King’s menu continues to evolve and attract new fans. Cases in point are the Grilled Dogs and the Buffalo Chicken Fries, which are quite a departure from the BK fare of days of yore but enjoy the rabid fandom of scores of fast food lovers.

Taco Bell moved up a slot to join the top five in 2015, thanks largely to their quirky weirdness, which appeals to many younger folks. As do their kooky menu options, which include the recently released Naked Chicken Chips, which are triangle-shaped pieces of crispy chicken that you dip in gooey nacho cheese sauce. Considering that one-third of children and teens eat fast food every single day, and, according to Yale University, children and teens make up the bulk of Fast Food’s advertising audience, Taco Bell’s zany, tricked-out approach to their menu is a pretty good gig for their bottom line.

Folks are spending wheelbarrows of money at the top-five joints listed above, but does that mean these places are really America’s favorites? Or do we just eat at certain places out of habit, convenience, or based on the toy that comes in the kids’ meals?

Just out of curiosity, we took an informal and highly unscientific Facebook poll to see what a random writer’s ragtag collection of friends might reveal about our collective favorites. Out of 68 comments regarding the question of favorite fast food, a whopping twenty-two fast food restaurants were mentioned. The top spot went to Whataburger with six mentions. Amigos, Arby’s, and Popeyes tied for second, third, and fourth place with five mentions each. McDonald’s squeaked into fifth place with four mentions.

The reasons behind the favorites were as diverse as the favorites themselves: Arby’s was cited for its “curly fry goodness,” while Subway was lauded for feeling “most like real food” and being “quick and tasty.” Someone liked Raisin’ Canes because they apparently have “the good ice.” Subway, Panera Bread, and Amigos were mentioned for their meatless options, while another respondent gushed that Taco Bell was “delicious and terrible and tasty and cheap.”

So really, dollar signs and scientific data aside, there are as many fast food favorites here in the good old USA as there are fast food places. Which ones are your favorites, and why?      .