In this article, we will compare two of the largest doughnut (or donut) fast food restaurants – Dunkin’ Donuts vs. Krispy Kreme. Both restaurants offer spectacular doughnuts loved by millions, but they also have many other items on their menus.

Krispy Kreme mainly focuses on their doughnuts and various beverages, which includes cold, hot, and iced. Dunkin’ Donuts is similar except they also go a step further in offering things like muffins, croissant sandwiches, and biscuits.

So let’s take a look at these two fast food doughnut restaurants and decide which one is a better deal and why. 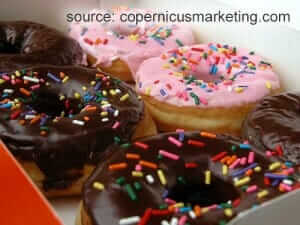 We will start off by saying that despite Dunkin’ Donuts being a newer company of the two, it is much larger today. That’s partially because it offers more products as well.

Dunkin’ Donuts sales come mainly from their coffee and doughnut products. They have a lot of competition in the coffee business from Starbucks, while Krispy Kreme is their primary doughnut competitor.

As you can see by the Dunkin’ Donuts prices, the food is pretty affordable and comparable to rest of the fast food industry. The doughnuts are priced so that dozen and half a dozen offer a better value than individually buying them. 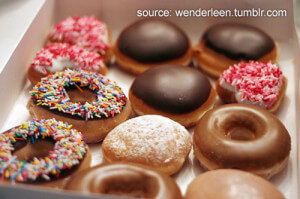 Krispy Kreme has an advantage in that it is mainly competing against Dunkin’ Donuts’ doughnut side of the business. It doesn’t really have any other larger competitors.

Because they focus so much on the doughnuts business, they offer more variety than Dunkin’ Donuts and their menu is setup around donuts. Although many people love to have lots of options, it can get rather confusing and time consuming. Krispy Kreme simplifies that experience by having a more streamlined menu.

So how do these two restaurants stack against each other? We would recommend that you go to Dunkin’ Donuts if you simply want breakfast or lunch with a doughnut on the side. If you’re going primarily for doughnuts, then Krispy Kreme without a doubt is a better option almost every time.

You won’t find much difference in the prices between the two restaurants. Both have individual donuts for sale at only 99 cents each. One advantage Dunkin’ Donuts holds over Krispy Kreme is that they offer a discount on half a dozen of donuts as well. Krispy Kreme only offers a discount for a dozen.

Depending on you local Krispy Kreme or Dunkin’ Donuts restaurant, you could also find special deals such as buy a dozen and get a second dozen for only 99 cents. Both restaurants tend to offer great deals when donuts are bought by the dozen.

To see how much bigger Dunkin’ Donuts’ menu is, see the table below for comparison.

As you can see, Dunkin’ Donuts is way beyond just a doughnut restaurant. The restaurant offers many more choices than Krispy Kreme.

So which fast food restaurant do we recommend when you’re in the mood for some tasty doughnuts?

As said previously, if you’re just looking to get some doughnuts, Krispy Kreme is a better option. You can view their entire menu in a matter of seconds and there aren’t sandwiches and other menu items to confuse you.

With Dunkin’ Donuts, you have the option of buying your breakfast or lunch there with doughnuts on the side. Having said that, many people go to Dunkin’ Donuts just for doughnuts because they simply love the way they taste.

We would recommend trying doughnuts from both restaurants and deciding which one you like better. Some of their doughnuts are very similar, while others are complete opposites.

Which doughnuts do you like better? Krispy Kreme or Dunkin’ Donuts? Let us know in the comments below.