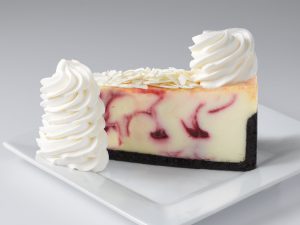 The Cheesecake Factory offers over 35 different flavors of cheesecake, and while this sounds impressive, the entire menu is 21 pages long and features over 250 items. It takes quite some time to peruse the whole menu- maybe this is why there’s always a wait to get a table! One of the tastiest cheesecake options is the White Chocolate Raspberry Truffle Cheesecake, which consistently ranks in the chain’s top 10 favorites. Let’s see if it lives up to its popularity.

The Cheesecake Factory story began in the 1940s when a woman named Evelyn Overton made her own version of a cheesecake recipe that she found in a local Detroit newspaper. People loved her cheesecakes so much that she opened up a small cheesecake shop in her basement until she gave up her business to raise her two children. In 1972, Evelyn again opened her own bakery called the Cheesecake Factory Bakery, where she sold 20 different cheesecakes and other desserts to restaurants around Los Angeles. Her son David expanded her bakery into what eventually became the world-famous Cheesecake Factory, which offered hundreds of food and dessert options, including the popular White Chocolate Raspberry Truffle Cheesecake.

The White Chocolate Raspberry Truffle Cheesecake is the same recipe used across all locations, so there shouldn’t be a taste difference. However, you can purchase this cheesecake by the slice or as an entire pie. A slice will cost between $7 and $9, while a whole cheesecake will run from $60 to $80, depending on the size.

This cheesecake is made with swirls of raspberry, topped with white chocolate, laid on a chocolate Oreo-like crust.

Some people are less than pleased when they find out the cheesecakes are frozen and shipped to each location, which means they’re thawed before serving. That doesn’t bother me because the ingredients are of the highest quality, and as the pies are treated with care, the flavors are well-maintained. This chilled, delectable treat is the perfect blend of flavors – tart raspberries, swirled into the ultra-sweet cheesecake, with a chocolate cookie crust. The white chocolate shavings on top add an extra flavor element. It’s served with a dollop of whipped cream – a light compliment to the dense cake. Does it “need” the extra sweetness? No. Does it taste even better with it? Definitely. One slice is enough for one person or sometimes two.

Cheesecakes aren’t known for their nutritional value. They’re high in sugar, calories, and carbs, and there aren’t many vitamins or minerals. It’s best to make sure you’re getting your daily nutrition from your main meals for the day because the cheesecake is really just “icing on the cake” – a little extra pleasure in life meant to enjoy.

The cheesecakes aren’t made on-site, so they’re not as fresh as you might hope. They come from a bakery production facility in Calabasas, California, and Rocky Mount, North Carolina and are then shipped to the restaurant locations, frozen. They’re defrosted before serving to customers, which makes me wonder why the price per slice is so high. The good thing is, you can always freeze your leftover cheesecake and thaw it as you wish. You could make an entire cheesecake last for quite some time this way. Either way, the quality of the ingredients is high, the presentation is beautiful, and cheesecakes always taste fresh and delicious, so perhaps it’s worth the price tag.

I don’t eat cheesecakes very often – though I do have one for my birthday and one (or two) around the holidays. The White Chocolate Raspberry Truffle is one of my top three favorites at Cheesecake Factory, and it definitely pleases a crowd. It’s beautiful to look at- especially the raspberry swirls throughout- and I love the chocolate Oreo crust.

A slice of White Chocolate Raspberry Truffle will run about the same as the other cheesecake options – between $7 and $9. While surveys consistently show that Americans view Cheesecake Factory as one of the most overpriced casual dining restaurants in the country, it doesn’t stop us from indulging every once in a while.

How would you rank Cheesecake Factory’s White Chocolate Raspberry Truffle Cheesecake? Is it one of your favorites? Or can you do without?