You are here: Fast Food Prices > Burger King Adds Oomph to Its Menu with the Chicken Big King

Burger King is one of the most popular fast food joints in the United States and around the world, thanks to its fire-grilled burgers and sandwiches. It was established in 1954 by James McLamore and David Edgerton, and has now exploded in popularity, continuing to add items to its menu to satisfy the varying and changing tastes of customers. The fast food market has always been competitive, and Burger King has responded by introducing a couple of items to match other fast food giants like McDonald’s. Most recently, it has added even more oomph to the menu by adding the Chicken Big King. 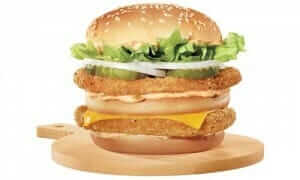 Burger King faces so much tough competition from fast food giants like McDonald’s, and the Big King is basically Burger King’s counter-offering to the famous Big Mac. The Big King is a whopping sandwich in a sesame seed bun, with two fire-grilled beef patties, iceberg lettuce, American cheese, onions, pickles, and Thousand Island dressing. There’s also a piece of the bun in between the two beef patties, much like the Big Mac. So imagine all of these elements, but replace the two beef patties with two chicken patties – and you get the Chicken Big King.

The Chicken Big King is a hearty sandwich for chicken-lovers, and it’s a great alternative to the Big King, in case the customer prefers beef over chicken. But chicken is actually a staple in the menus of fast food restaurants, even if it’s not their core product (unlike, say, KFC). For Burger King, there are quite a number of chicken offerings in the menu, and some of them are new as well:

This relatively new offering can be ordered as a three-piece or a five-piece, and it’s made with premium white meat chicken that’s deliciously marinated and battered. The chicken pieces are then tossed in a special Honey BBQ sauce, so you can a variety in the taste.

Another variation to the chicken strips is this offering, which is instead tossed in a hot and spicy buffalo sauce. When you order this, you also get the ranch sauce to complete that unique buffalo chicken taste.

For a slightly different taste, try this sandwich with crispy chicken together with sweet and spicy BBQ sauce and onion rings inside a toasted sesame seed bun.

Those who just want the premium and juicy white meat and none of the bread and sides can go for the nuggets and strips. You can dip these chicken pieces in a variety of sauces, including BBQ, Jalapeno BBQ, Zesty, Sweet & Sour, Honey Mustard, Buffalo, Ranch, and Kung Pao.

The original chicken sandwich is the classic breaded chicken fillet with mayonnaise and shredded lettuce, placed inside a sesame seed bun. In the spicy version, the breading used for the chicken fillet is mixed with cayenne and black pepper, adding that needed kick.

Imagine a chicken fillet that’s breaded to perfection and fried to a crisp, together with chopped lettuce, mayonnaise, and a toasted sesame bun. The spicy version is also good, because it comes with a layer of original firecracker sauce.

Like the TENDERGRILL, this comes with the artisan bread and all the sandwich elements, but instead of a grilled chicken fillet you get one that’s specially breaded and fried to a tender crisp.

Another Item to Put an Oomph in the Menu

Aside from the Chicken Big King and the other new items in its chicken offerings, Burger King has also thought of another way to put an oomph in their menu by offering a lower calorie version of their regular French fries. Fries are a fast food staple, and burgers are usually not complete without a side of fries and a drink.

But people are also becoming more health-conscious, which is why Burger King came up with crinkle-cut Satisfries, containing 30% fewer calories and 40% less fat compared to the regular Fries. Recently, Burger King has made the Satisfries available in the BK Kids Meal. This means that kids can now have the same great taste and less fat, only in a smaller portion.