You are here: Fast Food Prices > Bruster’s Ice Cream – The Best Homemade Dessert in the US

Ice cream is always going to be a staple in the American market. While it may have had its early history born in Ancient China and Europe (the sherbet) it was the American market that really propelled ice cream into the phenomenon it is today. Out of all the different brands and stores to offer ice cream, none is richer in flavor and texture than Bruster’s Ice Cream.

This is because Bruster’s Ice Cream doesn’t sell pre-made frozen desserts. The company’s ice cream and yogurt desserts are all made with a special milk-based recipe that is made right in the store. All of the items are made fresh and this is why Bruster’s ice creams don’t have ice crystal formations. They’re all creamy products that don’t taste anything like artificially flavored ice chips.

But it’s not just the ice creams that are carefully handmade; so are the waffle cones and all of the other major products that Bruster’s Ice Cream offers. This makes their products unique since they are all carefully made to be as fresh as possible, something most franchises discard in order to mass produce and quickly make sales.

It all began back in the 1950s when Bruce Reed began helping his parents with the family diner, Jerry’s Curb Service, which was located a few miles northwest from Pittsburgh, Pennsylvania, in Bridgewater. Being born into a restaurant-owning family he easily picked up the secrets of the business. 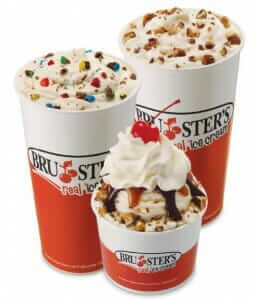 Then in 1989 he opened his first ice cream shop right next to the diner but this was a franchise under Handel’s Homemade Ice Cream and Yogurt. It didn’t last long because in just fifteen months he dropped the Handel’s moniker and trademarked his own brand, Bruster’s Ice Cream.

Today the brand has also begun franchising and there are now different branches in twenty states, from Florida to Ohio, Alabama to Texas, and more. Some branches also merge with Nathan’s Famous, a popular chain of hot dog franchises.

To this date the company has taken over most of the East Coast of the United States but since 2012 it has already begun expanding outward to the west, with branches now opening in Texas.

Best Sellers on the Menu

Bruster’s is known for their homemade products and the first and foremost is their homemade crunchy vanilla waffle cone. This is the epitome of delicious ice cream cones. When people buy a few scoops of ice cream they hardly expect the ice cream cone to be any good but Bruster’s bursts through all expectations by making cones that are just as delicious as the scoops they hold.

The ice cream itself comes in 24 different flavors and you also have your own choice of topping. With the unique, fresh recipe that guarantees no frosting and all cream, Bruster’s waffle cone ice creams are the best in the business.

The ice creams come in all flavors but the most iconic are the typical three: vanilla, strawberry, and chocolate. There are a lot of unique toppings other than the typical sprinkles too, such as a chocolate dinosaur bar among others.

Then there are the special sundaes that the company is popular for. One such variety is their Banana Split – it’s topped with Bruster’s pretzel rod and you can even get it for half the price on Thursdays, which allows customers to bring their own banana.

Lastly there are their smoothies. While the company is not so focused on smoothies the way Smoothie King or Planet Smoothie is, they do offer two varieties: banana and strawberry-banana. The factor that makes their smoothies different is that they use the same fresh ingredients and homemade milk-mix from their ice creams to guarantee a fresh, healthy, and delicious drink.

While it’s pretty known that Bruster’s Ice Cream uses homemade ingredients what is more surprising is that the company has a list of over 170 different recipes for all of their different products. Some are seasonal which is why people don’t see them on the menu at all times.

Bruster’s also just opened a new branch at the Columbus Civic Center and will be a part of the WWE-sponsored “Tribute to the Troops” event this upcoming December 9th and 10th.

Another interesting bit is that the official website for the company features special activities for young kids. Parents can download PDF activity pages for learning as well as downloadable coloring pages. The official site also features a special page with games for kids visiting the website.

The company also helps with fundraising opportunities. Kids and adults alike can download special fundraising materials like flyers and promo coupons directly from the website and this can be used to help raise money. Bruster’s Ice Cream also aids organizations in promoting events as well as opening new charity opportunities. Not only does this promote the company but it also helps build a stronger bond with their customers.