You are here: Fast Food Prices > 10 Best Fast Food Sauces of All Time

There’s a reason people keep a stash of their favorite fast food condiments in their kitchen. No store-bought sauces can compare to the gloriously creamy ranch from Popeyes or the addictive Chick-Fil-A sauce. Let’s face it – a standalone nugget or French fry is quite honestly pretty boring without a sauce to spice (or sweeten) things up, depending on your cravings. But, not all fast food sauces deserve the spotlight. Some deserve to be left at the bottom of the bag, and some deserve to be hoarded in your junk drawer.

So, let’s get right to it with a ranking of the the best fast food sauces of all time (plus what you should pair them with). Spoiler alert: you won’t be surprised by the first choice.

Chick-Fil-A has a cult following all over the country, and the most sought-after menu item is its signature sauce. I’ve heard of people carrying it around in their purses at all times – the obsession is that real. So, what makes Chick-Fil-A sauce the best fast food sauce, pretty much ever? It’s the classic combo of condiments that none of us ever thought to combine. Supposedly, the sauce is a mix of barbecue and honey mustard, plus whatever glorious secret ingredients they add to it to make our wallets open wide. Honestly, you can smother anything on the menu in this sauce, from Chick’n Minis on the breakfast menu to sandwiches to nuggets and fries.

Pair it with: Nuggets and Waffle Fries 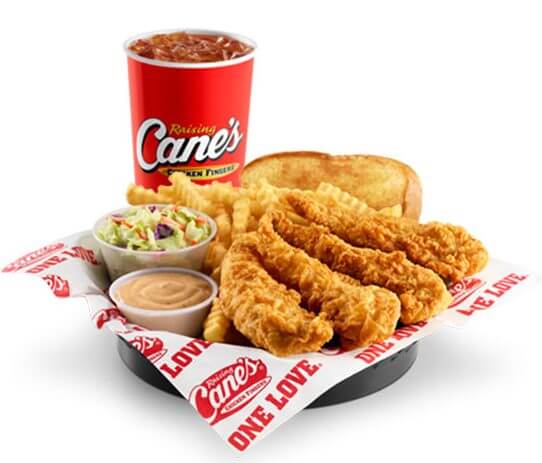 As you may have guessed by the name, this is Raising Cane’s signature sauce. In fact, the fast food chicken chain makes the tangy, slightly-spicy dipping sauce in-house every single day. It resembles honey mustard in appearance, but as far as flavor goes, it’s rumored to be made up of mayo, ketchup, and Worcestershire sauce, as well as some basic seasonings like salt, pepper, and garlic powder, and creole seasoning (that’s what’s in our copycat Raising Canes Sauce recipe, anyway). The fast food chain won’t officially leak what’s in the sauce, though.

It’s practically a sin to order tenders and crinkle cut fries without Cane’s sauce – they were made for each other.

Pair it with: Chicken Fingers

Popeyes may be the only fast food restaurant that serves chicken good enough to eat all on its own (don’t @ me, KFC!). But, if you’re in the mood to add some flavor to your already well-seasoned chicken, go for the Buttermilk Ranch. It’s a peppery, creamy sauce that complements the cajun spices that marinate Popeyes chicken. Save the sauce for the tenders or sandwich, though – Bonafide chicken deserves to be enjoyed alone, in all its glory.

Pair it with: Tenders

I debated putting In-N-Out’s signature sauce (or how the west coasters say “spread”) closer to the top of my list, but since only a small portion of the country gets to enjoy it, I decided against it. This thousand-island-esque sauce is truly legendary and is the star of the show on the secret menu “animal-style” dishes, like burgers and fries.

Don’t forget – you can ask for extra spread packets with your order to slather all over your . In fact, you can make your own Double Animal Style Burger and Fries with our recipes.

Pair it with: Animal Style Burger

Buffalo sauce is usually one of those wild cards at a fast food restaurant. You don’t know if you’re going to get hot sauce in a packet or a pouch of creamy sriracha. At Burger King, it’s the perfect concoction – slightly creamy with just the right amount of spice. The flavor is ideal for dipping Chicken Fries (those have a little kick, too), but Buffalo pairs well with really any chicken sandwich, nuggets, or burgers. If you’re not a huge Buffalo sauce fan, BK’s barbecue sauce is a close second.

Pair it with: Chicken Fries

Taco Bell’s food doesn’t typically lack flavor, but if you’re in the mood to burn your taste buds off, Fire Sauce is a good way to go. This hot-as-hell condiment has grown so popular over the years that you can buy packets on Amazon and bottles of it in the grocery store. And, it’s become a kitchen staple for young people all over the country. There’s no one food item we recommend pairing it with because it’ll essentially drown out the taste of anything you order, in the best way possible.

Pair it with: Anything

I love a good creamy sriracha. You get the best qualities of hot sauce (the spice and bold flavor) with the comforting taste of ranch (creamy and full of seasoning). This is another fast food sauce that people try to stock up on (Wendy’s isn’t always the most generous about giving you more than 1-2 sauces, so it’s quite the feat to do so). It’s not too spicy, but has enough kick to liven up any nuggets or burger – I just prefer it with an original chicken sandwich sans the mayo.

Pair it with: Chicken Sandwich

If you ever wish ketchup had just a little more flavor, Whataburger has answered your prayer. People in the south (where Whataburger is located) go wild over those tiny spicy ketchup packets, but can I blame them? I’m from the north where ketchup is sweet and sometimes tangy, but spicy? Only in my dreams. Of course, it goes well with everything that you’d put ordinary ketchup on – your burgers, fries, and tenders. But fortunately for folks like me who don’t live within driving distance of a Whataburger, you can purchase this spicy ketchup bottles at the restaurant’s online store. Three bottles for just $10.99 – that’s quite the steal.

Pair it with: Burgers

Bdubs Honey BBQ wings are the middle of the road when it comes to spiciness, but they’re a fan favorite for the bold and tangy flavor. It’s one of those sauces that’s spicier some days than others,  but its generally pretty mild. If you can’t decide what sauce or dry rub to get, it’s always a winner.

Pair it with: Boneless Wings

McDonald’s Sweet and Sour sauce tastes like childhood to me. But that’s kind of how I feel about everything on the menu, which makes me slightly concerned about my upbringing. Anyway, this classic condiment is the perfect pairing for McNuggets, but I find it just as delicious with French fries. The salt and sweet combo hits the spot anytime you’ve got conflicting cravings.

Pair it with: French Fries