When it comes to chicken the first name that comes to mind for many is KFC, and that’s understandable. In terms of marketing and distribution, KFC is way ahead of Lee’s Famous Recipe Chicken. When it comes to branding, KFC is more recognizable with the red and white and of course, there’s Colonel Sander’s likeness. But setting those aside, which one is better when it comes to the menus and the chicken? Let’s find out.

A Comparison of the Menus

A quick look at their menus will show you that Lee’s and KFC are somewhat similar when it comes to their choices. Whether this has something to do with the fact that Lee Cummings was Sander’s nephew or not is not clear. But there’s no getting around that fact. Their gravies don’t just look the same, but have a similar texture. Their potatoes both have that smooth texture, and there’s not much difference with the slaw either.

So with regards to those aspects, Lee’s Famous Recipe Chicken and KFC are the same, but Lee’s is more affordable. But of course the real test comes in the taste.

Both brands use pressure cooking, a method that Col. Sanders invented. There’s a reason why both restaurants prefer this method when cooking their chicken. Number one it cuts down the cooking time significantly, essential if you’re serving hungry customers. Second, it’s this method that gives both chicken skins the crispy texture while keeping the insides moist and juicy.

That does mean both chickens taste the same though. 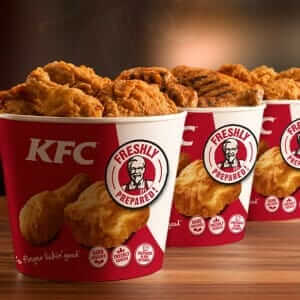 Not quite, because their recipes vary. KFC of course, has the famous 11 spices and herbs which are added to their chicken. Lee’s Famous Recipe Chicken on the other hand, are always fresh, hand breaded and dipped in honey. Of course both restaurants offer variants of their chicken recipes, but original versions are still available.

As far as crispiness is concerned, Lee’s is crispier than KFC. It’s not just crunchier but their chicken holds the juices in very well. While it’s crunchier than the KFC Original Recipe, the KFC Extra Crispy makes up for that.  The Extra Crispy is very crunchy and it isn’t too dry either. The flavor is comparable to Lee’s, and the texture is very good. 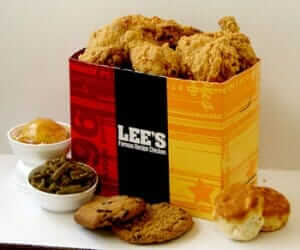 However, Lee’s Crispy + Spicy is something not to be missed. There are a lot of chicken flavors available, but if you’re only going to try one this should be it. The chicken meat plus the spiciness gives it that extra flavor, and it’s the best Lee’s has.

The sides are similar, although Lee’s has the advantage by offering gizzard and liver. That isn’t something you usually see in fast food menus today, and kudos to Lee’s for that. But overall though, the sides at KFC are a bit better.

A 3-piece meal at Lee’s Famous Recipe Chicken costs $6.39 while the 2-piece chicken with rice and gravy at KFC usually costs a couple of dollars more. Prices will vary depending on location of course. But Lee’s is almost always cheaper, that’s why they’re known as the low budget alternative to KFC. 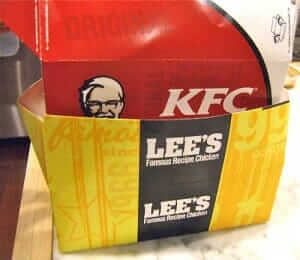 Lee’s Famous Recipe Chicken has the edge here since their chicken tastes as good as KFC if not better. However, the difference is that Lee’s is more affordable and there just seems to be more zest in their food offerings. This isn’t to say KFC has lost its edge. If you love the taste of classic Kentucky fried chicken and been eating KFC for a long time, you probably won’t switch. But if you’re looking for something different and more affordable, try Lee’s.

If the side by side comparison seems to point to a lot of similarities between the two, that should not be surprising. As mentioned earlier, Lee Cummings, founder of Lee’s, is the nephew of Colonel Sanders, but there’s more to the story than that.

Lee Cummings was the type of kid who spent most of his time in the kitchen in his home in Henryville, Indiana. It didn’t take long before he developed a passion for fried chicken and making them. Then in 1952 he began traveling with his uncle Colonel Harland Sanders, selling the Colonel’s famous herbs and spices.

Together the two would spearhead the development and expansion of KFC. Within three years of opening the first KFC location, 800 more followed. Following KFC’s sale in 1962 though, Cummings decided to go his own way and founded Harold’s Take-Home where his famous chicken recipe was introduced to the world.

The new restaurant proved to be a hit, and expanded rapidly. While it’s not as big as KFC today, Lee’s Famous Recipe Chicken offers an alternative to those who are in search of more affordable but great tasting chicken.