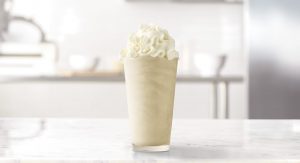 I like how Arby’s keeps things simple. There isn’t much “fluff” in the menu items or masking flavors with artificial flavorings. Their roast beef packs a punch, just like most of their other menu items, and their milkshakes are no exception. With only three flavors to choose from, the chain occasionally adds a seasonal shake to their menu. Still, you can always count on their chocolate shake, vanilla shake, and Jamocha shake (mocha and coffee/java). Whether you sip a shake next to your roast beef sandwich or pop open the lid to dip your fries into it, you’re in for a real treat.

The chain opened its first restaurant in 1964, but in the 1970s, it expanded to launching about 50 new locations per year. Their menu items also expanded to include Beef ‘n Cheddar, chicken sandwiches, their perfectly-seasoned curly fries, and two signature sauces: Arby’s Sauce and Horsey Sauce. Guess what else was on the menu back then? The Jamocha shake. I was surprised to learn that the Jamocha shake was offered before chocolate or vanilla- way to shake things up, Arby’s!

While Arby’s occasionally offers seasonal flavors, you can count on these three main players.

The Jamocha Shake began the milkshake game at Arby’s. Combining the words “java” and “mocha”, this cleverly-named and deliciously-mixed shake is a frosty, chocolatey, coffee-y treat that is beloved by shake lovers from the US and beyond.

It’s ok to go for simple – though Arby’s vanilla shake is still packed with sweet flavors and frosty goodness.

I find it interesting that Arby’s milkshakes are either in the top 5 fast-food milkshake favorites or they’re at the bottom of the list. Personally, I’ve never had a negative experience, and they remain in my personal top 5 favorites. Let’s explore why.

Arby’s uses real ice cream to make milkshakes thick. Then they cover the top with a giant swirl of whipped cream and chocolate sauce. While the shakes are thick, they’re not clumpy- nothing worse than trying to suck a milkshake out of a straw with zero luck. The shakes are also creamy and soft, without being runny or watery. You can tell from both the taste and texture that they’re made with real ice cream. The chocolate syrup provides a nice warm contrast to the chilled shake, and the whipped cream makes this indulgent treat perfect. It can be a bit dense to drink a large, but a small or medium is usually ideal. The Jamocha is the best choice for lifting you out of an afternoon slump, giving you just enough energy to finish the day with a pep in your step.

While milkshakes are generally full of sugar and calories, Arby’s has one benefit that some other fast-food chains don’t. Arby’s milkshakes are the only fast food shakes that do not contain traces of peanuts in them. So if you have a sensitivity or allergy to peanuts, this is the milkshake for you!

Arby’s milkshakes are worth purchasing just as they are, but if you can get a good deal, why not go for it? Arby’s has a Happy Hour special every day from 2 p.m. to 5 p.m., during which time you can purchase a small shake for $1. This offer is among some other good deals like a small drink, small fries, Jr. Chicken Sandwich, Jr. Roast Beef Sandwich, an Apple or Cherry Turnover, and a Jr. Ham & Cheddar Melt- each for just $1.

Arby’s milkshakes are in my top 5 favorite shakes from fast-food restaurants. I love pairing a roast beef sandwich with a sweet vanilla shake. (I’m simple.)

Arby’s milkshakes are less expensive than McDonald’s, a bit more costly than Wendy’s, and almost the same as Braum’s, so they’re priced competitively. We would recommend taking advantage of the Happy Hour specials to get an even better deal.

How do Arby’s milkshakes compare to some of the other fast-food milkshakes you’ve tried? Which chain offers your favorite?