Did you know that Arby’s offers 11 different sauces? The most popular of these, of course, is the Arby’s Sauce and the Horsey Sauce, both of which I put on everything I order from Arby’s. Now, you could just swipe a handful of sauce packages and hide them in a kitchen drawer until you’re ready for them, but assuming we’ve all already done that, let’s try to make our own from scratch.

If you’re interested in making your very own copycat Arby’s Roast Beef Sandwiches from home, both of these sauces will give you a more authentic Arby’s experience. Even though these sauces are tasty on their own, they’re even better together.

Arby’s Horsey Sauce is a creamy sauce with a toned-down horseradish taste, so it’s both sharp and mild – which is why it goes well with the Arby’s sauce. With both sauce recipes, you’ll be all set. You can even use them on regular sandwiches, sliders, or hamburgers.

This recipe yields a creamy version of the Horsey Sauce with a bit of texture, some heat, and a little bit of sweetness. It’s best if you make it ahead of time and let it rest in the refrigerator before serving. It’s even better if you let it rest overnight. Even better, you don’t need those little sauce packages anymore. You’ll be able to whip up Horsey Sauce any time you want it. 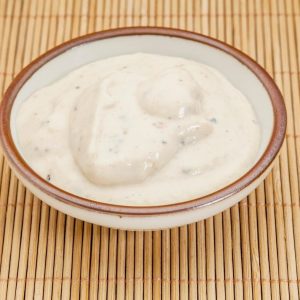 Are you looking for more inspiration for using your Horsey Sauce recipe? Arby’s offers a secret menu you might want to check out. Test your own sauce with their packaged sauce and decide which one you like best.