You are here: Fast Food Prices > The Amazing Food Choices at Zaxby’s

Chicken wings and chicken fingers, chicken sandwiches and chicken salads — Zaxby’s has them all in over 600 locations in the Southeastern region of the United States. Established in 1990 by Tony Townley and Zach McLeroy in Statesboro, Georgia, Zaxby’s is a casual dining chain of restaurants that have monikers for the dipping sauces which accompany their chicken fingers such as the Zax sauce, Nuclear and Insane.

Zaxby’s restaurants have a whimsical feel to them and, while varying in theme because of region or location, have objects and other decorations that feature whatever are common to the local communities they are in. In Zaxby’s Orlando, Florida location, for instance, the walls are lined with citrus-themed décor. The first Zaxby’s outside of Georgia state opened in Bowling Green, Kentucky in 1994. Today, Zaxby’s is operational in 15 states.

Zaxby’s Salads are Spelled with a “Z” for Zesty 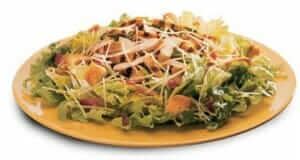 The “Most Popular” menu items at Zaxby’s restaurants are the Chicken Fingerz with the Texas toast, coleslaw, Crinkle fries, and Zax Sauce and the Wings and Chicken Fingerz with Crinkle fries, celery, Texas toast, and Ranch and Zax sauces. The “Zappitizers” include Spicy Fried Mushrooms, Onion Rings, Tatter Chips, and Fried White Cheddar Bites. And then there are the fresh, luscious salads:

Because You Can’t Have a Sandwich Without Chicken 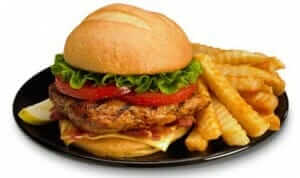 Party Platterz with a “Z” 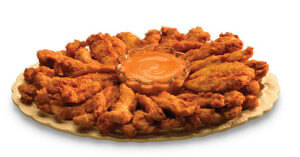 Unlike other food chains, Zaxby’s has several Party Platterz with Zaxby’s favorites in party-sized portions such as:

Chicken Fingerz Platter: 40 pieces for 8 to 12 people or 60 pieces for 12 to 18 people, this Platter consists of chicken tenderloin lightly battered and served with Zax Sauce.

Wings Platters: choice of Traditional or Boneless, this Platter is served with four of nine delicious Zaxby’s sauces, including Ranch, and celery to serve 8 to 12 or 12 to 18 people.

Zampler Platter: popular favorites Boneless or Traditional Wings and Fingerz in one single Platter served with Zax and Ranch sauces, and celery.

From the Eastern Seaboard to the Rocky Mountains

Between 1990 and 2014, Zaxby’s has opened stores from Madison, Alabama to Jefferson, Indiana and from to Roanoke, Virginia all the way to Ogden, Utah.

Joining the Zax Club offers more than newsletters and promotions to its members: Zaxby’s give one Meal Deal and one Nibbler, both for free, on a member’s birthday.