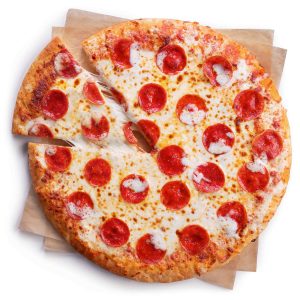 The 7-Eleven convenient stores are just that- convenient. You can pay your bills, fill your gas tank, or purchase a number of items like coffee, candy, prepared foods, dairy, snacks, and all kinds of drinks, including Slurpees and Big Gulps. Inspired by New York City’s Brooklyn Pizza, 7-Eleven now also offers pizzas at their Hot Bars in participating locations. I’ll admit up front, it’s not a delicious pizza by any means, but it’s not the absolute worst choice out there. Let’s find out how it stacks up value-wise in this 7-Eleven Pizzas Review.

You might remember before 2014 that you could buy an inexpensive frozen pizza from 7-Eleven, but as the stores began to evolve, and new services like Hot Bars were added to various locations, the convenient store giant took the opportunity to offer customers one of the most popular food items ever – pizza. They didn’t set out to offer the best pizza in the world, but one that was quick, cheap, and “convenient,” of course. It’s tough to beat value-wise at a dollar a slice, and with fantastic promo deals offered throughout the year, it’s a brilliant way to sell a lot of pizzas- even if they are on the ordinary side.

There are three types of pizzas available at your nearby 7-Eleven: Pepperoni, Triple-Cheese, and Delux Meat, each available as a 14-inch pie or by the slice. The marinara sauce is made of tomatoes and seasoned with Italian herbs, garlic, salt, and pepper. The Pepperoni Pizza is made with mozzarella cheese, pepperonis on top of the sauce. The Triple Cheese Pizza is topped with melted mozzarella, cheddar, and parmesan cheese. And the Deluxe Meat Pizza is topped with pepperoni, Canadian bacon, beef, pork sausage, and diced bacon.

Before eating a 7-Eleven Pizza, you have to know what you’re getting into. Don’t expect a gourmet pizza or even a decent frozen pizza you find at the grocery store. This is more comparable to the pizza slices we had in the cafeteria as kids – good enough to eat, not good enough to get too excited about.

Your 7-Eleven Pizza will be heated up in an oven for about 90 seconds. Each pie or slice comes out hot but barely cooked. The crust was thick and gooey, not crispy like I’d hope. The cheese was plentiful, and it all melted nicely, even though the flavors were a little flat.

The pepperonis are thin-sliced, even though the website says they’re thick-cut, but they were ok- standard, slightly-crispy, average in flavor, and not spicy.  The cheese toppings were ok. I prefer the three-cheese melt on the Triple-Cheese Pizza to the single cheese on the Pepperoni Pizza, and it needs to be salted or seasoned, but it’s average. The tomato sauce was bland; there weren’t many seasonings to taste more like a marinara sauce. Instead, it tasted like a can of tomato puree. The crust was my least favorite part. It’s soft, thick, and doughy, but not crispy or well-cooked.

The 7-Eleven Pizza isn’t healthy and shouldn’t be added to your normal lunch rotation. It’s very salty, with over 30% of your recommended daily amount in just one serving. It’s also highly-processed and high in saturated fats. The good news is the sugar content is low, with less than a half of a tablespoon of sugar per serving.

The 7-11 pizza is ordinary, and it doesn’t taste quite like the fancy description on the 7-Eleven’s website. It’s served hot(ish), but the crust is too doughy and thick. It might help to heat your pizza an extra minute to cook the crust more thoroughly, but that doesn’t make up for the crust or the sauce. The one thing this item has going in its favor is the price- one slice is just around $1. You can also order a combo that comes with 2 slices and a soda for about $2.50. It might not taste great, but you’ll be getting your money’s worth.

Overall, 7-Eleven makes an okay pizza, but I’m not a fan of the crust. You’d be better off purchasing one of the frozen 7-Eleven pizzas and heating it yourself.

One serving equals one slice of pepperoni pizza.

A large 14-inch pizza is around $5.50, while a single slice is around $1, or some locations offer a “Two for $2 deal.”  If you download the 7Rewards app, and you’ll be notified any time 7-Eleven has a great promo deal- and that happens a lot. Sometimes that even includes a Buy 1 Get 1 Free Pizza deal.

What do you think of our 7-Eleven Pizzas Review?

Have you tried one of the 7-Eleven Pizzas?  Did you like one-topping more than another? Was your crust any better than the ones I’ve tried? We’d love to hear your experience in the comments below.