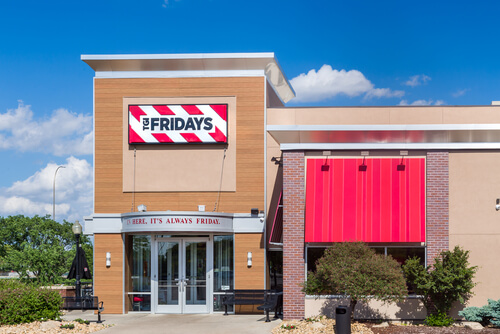 TGI Fridays is a long-time favorite for when you want to enjoy classic comfort food like cheeseburgers, fries, chicken, wings, and ribs. You can even toss a margarita or beer in there too!

Although TGI Fridays has definitely made its mark globally, with tons of local as well as international branches, they’ve reduced their menu over the past year. We weren’t too excited about that, but on the bright side, they still have plenty of coupons and deals that customers can easily access.

Whatever time of the year, there’s always some way for you to get a discount from TGI Fridays:

Nearly all of TGI Fridays’ coupons are online now since it’s so much more convenient (and customers from all over have equal chances of snagging them). While you can find TGI Fridays coupons on the usual coupon websites such as retailmenot.com and offers.com, you’ll have an easier time getting them directly from TGI Fridays.

Here’s how you can get TGI Fridays coupons without too much scouring through Google:

The first place to check for TGI Fridays’ coupons would be their website (tgifridays.com).

On their website, you can spot coupons and promos right away by selecting your area and the branch closest to you and then scanning the menu. There are often promos shown on the side or as pop-up boxes. The website will take you to the menu of your local branch, so you can be sure that whatever promo you see is valid for that branch.

Alternatively, you can head to tgifridays.com/promotions for an instant list of promos. Don’t be discouraged if it says there are currently no promos. They always have promos running, so this just means that you have to search for their promos elsewhere.

To catch plenty of coupons from TGI Fridays, it pays to check their social media accounts. Whether you’re following them on Facebook, Twitter, or Instagram, they post about limited-time coupons every other week. The promo code is usually included in their post, so you can avail of the coupon right away the next time you order.

Here are some recurring coupons that they’ve posted about:

These coupons are usually only available for a week up to a month (or even only while supplies last). Although they don’t last that long, TGI Fridays will post about these coupons again after some time, so you can expect to find them again eventually.

For minimal searching (and maximum savings), you have a lot to gain by joining TGI Fridays’ Rewards program. By becoming a member, you can earn a point for every $1 you spend on your order. Once you’ve racked up enough points, there are a lot of rewards for you to choose from. And yes, you can even buy a full-on entree like their Big Ribs eventually! It also comes with other perks, such as a free appetizer upon signing up and exclusive coupons.

What rewards can I earn?

You can start cashing in rewards once you’re at 30 points. Here’s their current tier of rewards:

If you’re a regular at TGI Fridays, then there’s really no reason not to join their Rewards program. That’s a lot of potential free food!

How do I join?

What are the other benefits of joining?

Just by signing up, you can get a free appetizer for your next order. A lot of TGI Fridays coupons are also only available for members, and they pamper you on your birthday with a free dessert and entree.

TGI Fridays offers major deals every now and then, and these always end up making a splash because the deals are pretty generous. They’ve held the following deals on and off over the past few years:

When it comes to group lunches or dinners, TGI Fridays can be an affordable choice because of their Family Meal Bundles.

Their Family Meal Bundles are good for 4 to 6 people. Aside from the main course, the bundle include either House or Caesar Salad along with two sides and a half-gallon drink. Some of their most well-known Family Meal Bundles are Family Size Wings, Whiskey-Glazed (consisting of chicken breasts and ribs), and Fettuccine and Tortellini for those who prefer pasta.

Prices range from $29.99 (for a Slider Bundle) to $72.49 (for a Pasta Bundle). In any case, it’s cheaper than ordering each Bundle item individually.

TGI Fridays got hundreds of customers lining up in 2018 and 2020 for the Feast for Two deal. For only $20 to $29, customers could get a full three-course meal for two. This covers two appetizers, two entrees, and two desserts in the form of Chocolate Bundt Cakes.

What was neat about this was you could customize your appetizers and entrees. Although the choices for appetizers are more limited, you could pick from more than 10 possible entrees. The price mainly depends on the entrees – you pay $20 for entrees such as cheeseburgers and chicken tenders, while it’s $29 for ribs and steak.

Aside from the lower cost, this was a huge hit because customers were able to design their own three-course meal. TGI Fridays is likely to offer this again, and you might want to take advantage of this once it’s up.

Restaurant gift cards are one of the most practical gifts (or prizes) around. If you’re getting a gift card from TGI Fridays, you might gain freebies from it. They occasionally have promos where you get a $5 Bonus Bites card upon buying a $25 gift card.

TGI Fridays may never have a full buffet option, but the next best thing is their Endless Appetizers deal. As you can tell from the name, customers can order an unlimited amount of appetizers for only $12.

There’s a slight catch, though. TGI Fridays has offered this deal in two variations: you can either get unlimited amounts of one appetizer, or you’re free to order everything from a small list of appetizers. The appetizers included in this deal are usually:

That’s still snacking galore! Unlimited Wings and Chicken Strips might even be heavy enough for a meal. Their Endless Appetizers deal runs for a limited time only and only in certain branches, but it does tend to go viral when announced.

On top of deals and coupons, TGI Fridays’ menu has specials that you can avail of every day:

Lunch is one of the best times to eat at TGI Fridays because you can automatically get discounts with their $12.99 Lunch Specials. This works whether you’re dining in or ordering through their delivery app.

For $12.99, you can have an all-in meal that includes a beverage, an appetizer, and an entree. Aside from the usual iced tea and fountain soda, their beverage options include alcoholic drinks such as wines, margaritas, and beer. Appetizers are personal-sized, and you can pick from the same Endless Appetizers deal list.

Finally, entree options have a good range of variety:

Since you can mix and match your food items, you won’t get tired of this special deal even if it’s what you order from TGI Fridays every time.

If a restaurant has alcohol on their menu, then they probably have a Happy Hour special somewhere. TGI Fridays is no different, except that their Happy Hour is available the whole time they’re open and not just on evenings. In TGI Fridays’ exact words, they have Happy Hour all day, every day.

They’ve set aside a special 5 Menu, where you can get appetizers and drinks for only $5. This differs per branch, but their most common menu items include margaritas, iced tea, cocktails, chips, and fries. In addition, they have unique drink specials every month for customers looking for something more unpredictable.

For the Happy Hour Special, you usually have to be physically present at their store. You can check with the local branch near you to know more about their Happy Hour deals and menus.