Healthy fast food options are becoming more and more available, and it is no surprise that Subway is at the top of the list for offering fresh delicious meals in a hurry. Vegetarian and vegan customers would usually stick to the veggie delite sandwich or chopped salad because they’re super customizable.

But there are only so many veggie combinations.

While all of the toppings and dressings are fresh and chilled, I am a big fan of hot meals – especially since we’re still in the midst of winter. Subway’s Veggie Patty offers a flavorful hot meat alternative that can be added to either a veggie salad or sandwich. I have to add that there seems to be some confusion on if this is vegan or not.

It most decidedly is not vegan since it contains dairy (milk and eggs.) It’s still great news for vegetarians, but I am a bit bummed that vegan options are still lacking basically everywhere.

In the growing demand for meat alternatives in fast food and casual dining restaurants, Subway introduced its version of the veggie patty, with its unique blend of grains, vegetables, and seasonings. It’s really no wonder where this inspiration came from since everyone is finally catching on to people’s growing desire to avoid meat.

And, let’s be honest, there are only so many salads one person can take before you’re sick of them.

Even still, Subway only launched this in a limited number of franchises to test the water. It’s received somewhat mixed reviews by those who have tried it, but it’s slowly spreading to more franchises across the country.

There is only one veggie patty option available at Subway, but there are a couple of ways to order it.

You can include a veggie patty with a veggie delite sandwich to give the sandwich a fuller bite. Another option is to slice up a patty and add it to your veggie delite chopped salad. You can create any flavor combinations with vegetables, toppings, and dressings, so build your sandwich or salad however you want. 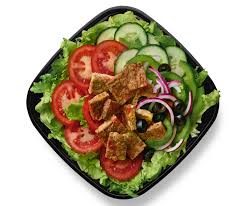 I prefer the veggie patty as a sandwich on toasted parmesan oregano bread. This gives the satisfaction of eating both fresh, crisp vegetables and a hot cooked meal. The sandwich is also easier to eat on the go than a salad.

Subway’s veggie patty is packed with a lot more flavor and heartiness than one might expect, so let’s explore the flavor and nutrition of this delicious meat alternative.

The hot Subway Veggie Patty is surprisingly tasty and full of flavor. I find that a lot of veggie patties taste bland and mushy. But this patty has a consistency more similar to a chicken patty than a veggie patty, and it has a firm chew to it, kind of like a tempeh chew.

Crunchy on the outside and moist once you bite into it, the texture is more solid than a bean- or potato-based veggie patty. While the patty is not spicy, it does have a strong peppery flavor that gives it a bit of a kick.

Typically, you would not order a Subway Veggie Patty just by itself because it is meant to be an addition to either a Veggie Delite Chopped Salad or perhaps a Veggie Delite Sandwich. The patty itself has only 160 calories, but once you add bread and other veggies, the sandwich is about 375 calories.

Adding cheese and dressings can increase your caloric intake by another 100-200 calories. The patty also has 520 mg of Sodium, which is over 20% of your daily intake, so you may want to go lighter on your other food choices for the day. Be sure to get as many vegetables in your sandwich as you can to help boost the nutritional value- the more veggies, the better.

If you have allergies, you may want to use caution in ordering the Subway Veggie Patty because it is made with milk, egg whites, grains, wheat gluten, and soy flour.

The Subway Veggie Patty is a good source of protein and healthy fats, and it can be added to other vegetable-based Subway sandwiches or salads, so it is a delicious, versatile meat alternative for me. I enjoy eating hot cooked meals, as well as fresh vegetables.

With the many flavor combinations that I can create using various toppings and dressings, this is a healthy, filling choice for lunch, dinner, or a midday snack. Subway also offers weekly coupons online or in the mail, making it as affordable as it is tasty.

With over 34,000 franchises all over the world, I know I can find a Subway wherever I am. Even with all of the food choices available during our travels, Subway remains one of my family’s favorite restaurants. The Veggie Patty Sandwich is one of my top fast food choices for nutrition, flavor, and value.

For anyone looking for an alternative to meat, Subway’s Veggie Patty is an exciting addition to a regular vegetable sandwich or salad. But not all veggie patties are created equal- while some may meet vegan requirements, these do not. If you have a specific diet or allergies, this may not be the best option.

Click here and scroll to “Ingredients Matter ” to check out a PDF file that includes all ingredients in the Subway Veggie Patty. Fried using a blend of canola oil and olive oil, the patty is low in fat. It is cholesterol-free and a good source of protein, making it a Keto-friendly option.

We are curious to know if your local subway franchise includes the Veggie Patty on their menu: Let us know in the comments below if you have ordered it to create a more hardy veggie sandwich or salad.