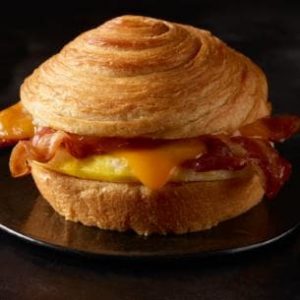 Many fast-food restaurants serve breakfast: McDonald’s, Starbucks, Whataburger, Burger King all offer their version of breakfast sandwiches. Some are tasty, some are awful, some are expensive, some are cheap. While Starbucks isn’t the least expensive option, it’s a fast option. Starbucks is mostly famous for its coffee, but the international franchise also serves fourteen hot breakfast options. Most of these are sandwiches or wraps, perfect for starting your morning off right. I was really interested in trying the Starbucks Smoked Gouda Bacon Cheddar Sandwich to see if I could add it to my Favorites list. So is it a favorite or a flop?

Starbucks rolled out its warm breakfast sandwiches in April of 2003. They began with egg, cheese, and ham, bacon, or sausage sandwiches in its hometown coffee shops. And the franchise has expanded its offerings since then. By the end of 2006, warm breakfast was being offered in about 600 Starbucks locations, and now, you can find them in just about any location.

I’m not sure you can order it any differently than it comes, but I have seen it offered on two different types of bread. One bread is a croissant, and the other is an artisan ciabatta bun. Both options could use more flavor and freshness. I prefer mine on a biscuit, and in that case, I’d order the Sausage, Cheddar, & Egg Breakfast Sandwich.

Starbucks describes this sandwich as having sizzling applewood-smoked bacon, melted aged Gouda, and a Parmesan frittata layered on an artisan roll for extra-smoky breakfast goodness. Sounds amazing, doesn’t it? Unfortunately, it didn’t quite cut it for me, and I was disappointed that the sandwich didn’t live up to its description. Vendors prepare these breakfast sandwiches daily and deliver them each morning. The sandwiches are heated up in countertop ovens and served as ordered.

The first issue I had with this sandwich was that it didn’t taste as fresh as I expected. It’s like it was made, sat in the shop, and was reheated when I ordered it. The bacon was smokey, but it wasn’t sizzling. It wasn’t even crispy, and I’m not a fan of floppy bacon. The egg was so-so; it was an overcooked fried egg that tasted like it had been reheated a time or two. The gooey melted gouda should have been the star of the sandwich, and while it was smokey and added a flair to the sandwich, it felt like it didn’t belong. The cheddar cheese was melted, but there wasn’t very much of it, and it was clearly melted long before I ordered it because it had seeped into the croissant. The croissant itself wasn’t my favorite either- it was dense and slightly hard- not a soft, fresh breakfast ciabatta artisan bread I expected. The key to getting a fresher-tasting sandwich is to get there early in the morning before the sandwiches have sat around all day.

According to Starbucks’ nutritional information, the Smoked Gouda Bacon Cheddar Sandwich comes with a frittata egg that contains soybean oil, unmodified corn starch, xanthan gum, citric acid, and powdered cellulose instead of freshly cracked eggs. The sandwich is full of calories, fat, sodium, and carbs, so it’s not a good option if you’re watching your dietary intake. If you really want a breakfast sandwich from Starbucks, but you’d prefer a healthier option, a better choice would be the Reduced-Fat Turkey Bacon & Cage Free Egg White Breakfast Sandwich.

Had this been on a dollar value menu at a fast-food restaurant, maybe it would have been acceptable- it’s hard to complain over a meal that costs a dollar. But for almost $4, this was a disappointment in size, flavor, and freshness.

The earlier you go to Starbucks, the fresher the breakfast options. The later in the day, the longer the sandwiches have been sitting out. Of course, your barista will heat it for you, but re-heated sandwiches aren’t my favorite. The idea of the sandwich is good, but the execution is a bit off. Even though it’s not awful, I wouldn’t order it again. I prefer to stick to Starbucks frappuccinos and muffins.

Starbucks breakfast sandwiches are $3.75 to $4. Every once in awhile, Starbucks will offer a combo deal where you can purchase a breakfast sandwich and a cup of coffee for around $5, but you’ll have to check with your local Starbucks or their website for their current deals and discounts. Still, this sandwich at Starbucks is consistent with similar menu items at other fast-food restaurants and considering it comes with gouda cheese and artisan bread, it’s actually a good deal. The Classic Egg & Cheese with (Ham, Bacon, or Sausage) at Dunkin’ Donuts is $3.59. The Bagel with Bacon, Egg, Lettuce, and Tomato at Tim Horton’s is $3.99. And the Bacon, Egg & Cheese Biscuit at McDonald’s is $3.19.

Have you tried any of Starbucks breakfast sandwiches? Which one is your favorite? How does the Smoked Gouda Bacon Cheddar Sandwich rank on your list of preferred breakfast items? We’d love to hear your thoughts in the comments below.