You are here: Fast Food Prices > Review: Are Taco Bell’s Nacho Fries Worth It? 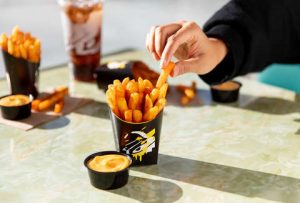 Not to brag, but I’m a self-certified fry and nacho snob so, naturally, everything about the nacho fries beckoned me to judge them. Including the sometimes grandiose claims from fans and Taco Bell.

If you don’t know, these fries are doused in “Mexican seasoning” and come with a side of nacho cheese. Unless you get them upgraded to Nacho Fries Supreme, which comes with melted cheese, seasoned ground beef, tomatoes, and sour cream. There’s also the Bell Grande, which doubles your portion size for $5. And, if you want to be fancy about it, you can opt for guac at an additional cost.

But, more to-the-point, why should you care what they are?

Reason one: these fries are the most successful product launched from Taco Bell ever – which means these fries did better than their tacos.

Reason two: considering Taco Bell has been around since the ‘60’s – and is known for tacos – that’s a pretty big deal.

Reason three: the internet damn near rioted when they got taken away.

Reason four: the level of buzz surrounding these french fries from Taco Bell was explosive.

Taco Bell launched their nacho fries with a hefty dose of self-promotion back in 2018. And, as much as I hate to admit it, their press release amped me up:

“From the menu brand who brought you the Naked Chicken Chalupa and Crunchwrap Supreme, comes Nacho Fries, set to make their debut in restaurants nationwide for just $1. The most-anticipated menu item release of the year will be available crisped to perfection with bold Mexican seasoning and served with a dippable side of warm Nacho Cheese, beginning January 25.”

A bit overdone? Maybe, but you can certainly hear Taco Bell’s bass-y beat in the background as you read it. But it wasn’t just Taco Bell that tooted its horn (or rang its own bell?):

Can we petition to keep the #nachofries a permanent addition to the menu at @tacobell? My everyday life is now riddled w anxiety that I’ll wake up & they’ll be gone again.

That moment when you’re having a week & then you get an email that @tacobell #nachofries are back. Me inside right now ????. pic.twitter.com/OEzDGGPaqg

After launching these fries as an LTO, pulling them, relaunching, repulling, and relaunching in typical fast-food-fashion, Taco Bell announced plans to launch an “all-new flavor innovation that’s sure to receive critical and fan acclaim” in January 2020. Of course, we still have no idea what this flavor innovation is, or if their lofty statement will hold water with critics of the Bell (myself included.)

Taco Bell’s “inspiration” for the nacho fries – if you want to stretch the limits of the word – seems to come from their odd competition with McDonald’s. As far as all the other toppings go, the cheese, beef, guac, hot sauce, and any other fixing on these fries, have no intention of leaving Taco Bell anytime soon. To me it seems like a smart move to step on the massive toes of burger mongers like McDonald’s, BK, and Wendy’s without too much financial risk.

But would I call these fries… “inspired”? Eh, hardly. The idea of spicy or loaded fries has been around for a while, Taco Bell grabbed both and mashed them together (pun intended.) Certainly not as inspired as their naked chalupa or Doritos locos tacos. The one unique thing these fries have going for them is the description of the “Mexican” seasoning, and I’ll get into why I added quotations in a minute.

There are two types available, or two types that will be available, rather. One is, of course, the Mexican seasoned fries. The other is a big question mark that we’ll likely have to wait until the end of January 2020 to unbox. All we know is that Taco Bell is dubbing whatever spin-off this is as a “flavor innovation.”

To me, the most exciting part about these fries isn’t what Taco Bell wants to do with them, it’s what you can do with them. I’m eagerly awaiting the arrival of a maverick secret recipe creator to put these bad boys to good use.

In the meantime, we’ll just have to deal with eating the fries as intended, I guess.

While Taco Bell’s press release claims their fries are “crisped to perfection”, I was left wondering whose version of perfection these fries were crisped to. If you’re into the whole slightly crispy outside, totally smooshed ‘tato on the inside thing, you’ll probably like these more than I did. But, on that note, they didn’t turn to total mush under the toppings, so I guess you have to take a hit somewhere to accomplish that.

And the texture of the cheese was something you’d likely expect from Taco Bell. Once slightly cooled, it left a thick skin that the fries were unable to penetrate. Worse still, when warm, the cheese slid right off the fries.

As far as taste goes, these are a Mexican miss. There weren’t any hints of cumin (which surprised me, to say the least) and they weren’t spicy – like at all – despite the inclusion of cayenne pepper. The flavoring was bland at best. Certainly not Mexican, and even Mexican-inspired might be a stretch. That’s not to say they tasted bad, but they didn’t have much flavor other than an undiscernible hodgepodge of flavor and ‘tato.

The fries themselves aren’t that much, all considering. But when you look at the minuscule portion sizes it does put it into perspective. But, again, considering their origins? They’re not the least healthy thing you can order.

These fries are $1, so it’s hard to find a reason they wouldn’t be worth a try. They were a miss for me – but, again, nacho and fry snob – but it caused near mass panic when they came back in 2019. So much noise was generated over these fries that Taco Bell announced via Twitter, “We’ve heard our fans loud and clear – they’ve made waves across social media, demanding that we bring back our famous fries.”

So my one “eh” opinion on these seems to be lost in the noise of raving fans.

I regret nothing, and I would advise most people to at least consider trying these. Especially if you’re into steak fries and cheese whiz – which is basically what this is.

Are you a maverick fry eater? Let us know in the comments what you think or what secret recipe mashups you’ve concocted with these fries! Who knows, we just might help spread your crazy ideas.