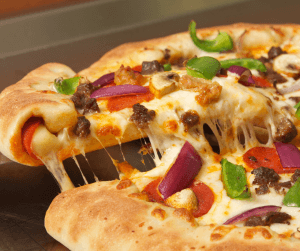 There are a lot of pizza options out there, but not all pizza is created equal. Now I myself am not terribly picky about pizza – I love just about every pie I’ve tried. But my kids are pretty vocal about the pizza they prefer over the rest, and that’s always Pizza Hut Stuffed Crust Pizza.

In 1995, Pizza Hut introduced the Stuffed Crust Pizza, which was invented by Patty Scheibmeir. Her method includes sticks of mozzarella string cheese packed into dough before baking, but her methodology took about three years to develop. While it may have seemed revolutionary at the time, it didn’t come without backlash. A Brooklyn-based cheese-maker named Anthony Mongiello patented his stuff crust pizza method in 1987, and sued Pizza Hut for infringement for $1 billion in 1999. Unfortunately for Mr. Mongiello, he lost the case on the grounds that the products were similar but the patent hadn’t been infringed.

Stuffed crust pizza increased business at Pizza Hut by 37%. Because the outer crust is filled with cheese, the chain designed a special dough formula that does not rise as high as the original.

When it comes to Pizza Hut crusts, customers have several options. While cheese-stuffed crust is the most popular, you can actually order it stuffed with bacon. Or you can order your crust in any of the following ways.

The Pizza Hut Stuffed Crust Pizza is an extra playful pizza that you can eat backwards. It’s a pizzeria-style crust with a ring of melted cheese baked right into the crust. It’s available in medium and large, and your kids are like mine, you’ll want a large. Or two.

No need to discuss the toppings here, as everyone has their personal favorites, and I don’t want to add to the argument that pineapple is an acceptable topping (it’s not!). The crust itself is a winner. It’s always fresh and hot, never soggy, and has just the right balance of crispiness and dough in the texture. If you’re like me, you eat your pizza slice leaving the cheese-crust stuffed to savor at the end. If you’re like my kids, your crust would have been gone before finishing this paragraph. To be honest, I think eating the stuffed crust first isn’t a bad idea because it’s still hot and fresh, and the cheese hasn’t had time to settle or harden much. Mozzarella is perfect for biting into and getting a long string of cheese from the pizza to your mouth. It’s like eating a giant cheese stick with a slice of pizza attached to it, and it’s a lot of fun.

Freshness plays a factor here. If the pizza is sitting around for too long, the cheese isn’t as “stringy”. Even if you re-heat it at home, it’s not quite the same. Be sure to eat it fresh and hot.

Bread stuffed with cheese isn’t one of the healthier items anywhere. But it’s not as bad as you might think. Actually a serving size of stuffed crust pizza has about the same amount of calories and fat as any large slices of pizza from Pizza Hut. It’s also less than most fast-food burgers. If you’re watching your caloric intake, I’d recommend ordering pizza with lots of veggies and drinking water instead of soda with your meal.

Pizza Hut Stuffed Crust Pizza is definitely worth it. Even if it weren’t for my kids, I’d order a medium and keep it all to myself for a few days (not that they would ever let me keep a pizza to myself!). It’s extra filling, and like I mentioned, it’s like eating pizza and cheese sticks- two of my favorites stuffed into one. You can get away with feeding four people on one pie and some drinks, which keeps the price down, and you can find a Pizza Hut all across the US and internationally. A little slice of home wherever you go.

Pizza Hut Stuffed Crust Pizza is in our top go-to Friday night meals that we enjoy with a movie. Delicious food, fast delivery service, bread oozing with cheese, and a bottle of wine chilling in the fridge? I’m all the way good with that. This pizza gets a big thumbs up from me.

A large stuffed crust pizza is only $16.99. This includes cheese only, Cheese-Lovers, Meat-Lovers, Veggie-lovers, BBQ-Lovers, New Primo Meat, and Hawaiian pizzas. The large Chicken Supreme and Super Supreme are $17.99 each.  With Pizza Hut coupons you can often get good savings on stuffed crust pizza and other Pizza Hut favorites.

Do you prefer your pizza with original crust? Or do you enjoy treating yourself to cheese-stuffed crust? Which are your favorite pizza topping on stuffed crust pizza? Let us know in the comments below.