Panera is a restaurant chain that has always paved its own way, never following a trend just because everyone else is doing it. When it comes to their “Secret Menu,” that concept is no different. Back in 2013, Panera leaked a healthy secret menu filled with items the restaurant crafted themselves. Ordinarily, secret menus are customer creations – things consumers wish their favorite fast-food chains would have on the regular menu. But just because Panera did things their own way doesn’t mean people didn’t go crazy for it. From healthy bowls to wraps and salads, Panera’s secret menu was unlike anything customers had seen before, but like most wonderful things in the food industry, the menu was only around for a limited time. But don’t fret – many Panera locations will still create the secret menu items for you – if you know what they are, that is. Fortunately for you, we’re here to resurrect the Panera Secret Menu once and for all. 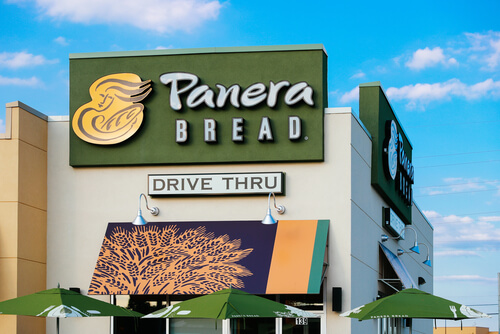 Keep in mind, Panera Secret Menu items are only served at participating locations that carry the proper ingredients necessary to whip up these dishes. Panera is not required to create these items, either, since they are not on the regular menu. Since it has been a while since the release of the Secret Menu, not all Panera employees will know what you’re talking about when you order a Power Steak Lettuce Wrap, so use our list as a guide to order.

Note: normally, we can’t disclose the exact nutritional values for Secret menu items because, well, nobody knows what they are. But since Panera leaked everything we need to know, we’re blessing you with calories, carbs, and protein for each item.

Out of all the “secret” options Panera released, the Hummus Bowl is by far one of the more popular. And while you can attempt to order it today, it may be more difficult to get your hands on this one because of the cilantro jalapeño hummus. The rest of the ingredients in the Power Chicken Hummus Bowl are fairly basic, however, so the restaurant shouldn’t have any issues coming up with those. In addition to grilled chicken and hummus, the bowl includes spinach, red onions, tomatoes, and cucumbers.

Although Panera Secret Menu isn’t “live” anymore, most locations will have all the ingredients they need to whip up these healthy lettuce wraps. Along with steak and lettuce, the Power Steak Lettuce Wraps come with tomatoes, red onions, cucumbers, and basil pesto with lemon juice and cilantro for added zest.

Panera changes its salad line-up quite often, and there have surely been similar Mediterranean-style options on the regular menu over the years. This secret menu item contains sliced antibiotic-free chicken on a bed of baby spinach and romaine lettuce. The salad is topped with diced tomatoes, hard-boiled eggs, and bacon, as well as a drizzle of olive oil.

The Power Mediterranean Roasted Turkey Salad is similar to the aforementioned salad, but there are a few notable differences. Of course, there’s turkey and lettuce, but this option also includes red onions, tomatoes, and kalamata olives, as well as olive oil dressing.

There aren’t too many surprises or secrets in this power breakfast egg bowl, containing roasted turkey, egg whites, baby spinach, basil pesto, and peppers. It’s as healthy as it gets, though.

The egg bowl with steak may be our favorite on the list because you can’t find anything like it on the regular menu. There’s just something about the steak and eggs combo. It’s essentially the same menu item as the roasted turkey option, containing egg whites, baby spinach, basil pesto, steak, and peppers.

To learn more about what it’s like to work at Panera, check out our Panera Careers page. You can also check out Panera Bread Catering Prices.