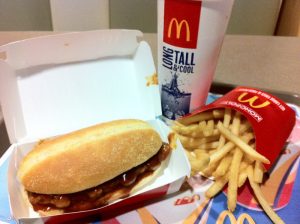 McDonald’s remains one of the world’s leaders in the fast-food industry. They keep on top of the competition by trying new things and limiting some menu items’ availability. It’s a way to keep consumers excited about seasonal items, and it also gives the restaurants something new or improved to advertise each year (or quarter). In the case of the McDonald’s McRib, it’s been added and excluded from the menu since the 1980s, and now it’s reintroduced sometime during the fall, which gives their customers something to look forward to. With the fall season in full swing, you just might be able to find one at your local McDonald’s location.

The McRib was inspired out of necessity for the fast-food market. McNuggets were doing so well that there was a shortage of chickens and not a way to supply them to so many consumers. McDonald’s had to come up with a new product that would fill this need. The McRib was manufactured to be a patty shaped like a slab of ribs, even though it would have been less expensive to shape them into a round patty and serve them on regular hamburger buns. When the sandwich was first introduced, it came with a packet of  McRib Hot Sauce, which was a clear liquid in a semi-chrome packet the size of a standard ketchup packet.

The McRib was first introduced to the McDonald’s menu in 1981 but was removed in 1985 after poor sales. It was reintroduced in 1989 and stayed on the menu until 2005 in many countries. Since then, it’s been available for a limited time each year, usually during the fall season, although it remains a permanent menu item at McDonald’s restaurants in Germany.

The McRib is back. But you won’t find many variations of this sandwich. It’s processed and prepared the same way across the globe with only minor tweaks by location, such as the number of onions or pickles added to each sandwich.

The McDonald’s McRib is a pork sandwich that comes with a ground pork patty covered in barbecue sauce, topped with slices of onions and two to three pickle slices, served on a corn-meal-dusted 6-inch sandwich roll.

You have to know before ordering that the McRib isn’t really a rib. It’s made by processing real pork meat with water, salt, sugar, and preservatives and then shaping it into something that vaguely resembles a small rack of ribs. These rib patties (for a more accurate word) are then sprayed down with water and frozen until they’re thawed and used in each location. Not sure where you can find one? Check out this McRib Locator website.

If you can get past what the McRib is made of, it’s actually pretty juicy. It tastes similar to rib meat without the texture or the bones, but the barbeque sauce really helps convince you this is a barbeque rib sandwich. It’s a bit different from McDonald’s typical dipping sauce- it has more of a tangy, less sweet flavor, with more spice and smokiness.

The onions and pickles were crunchy, giving the sandwich a pleasant bite, and because the sandwich is served with barbeque sauce and minimal toppings, you get the full effect of the meat. The bun is an interesting twist- it’s unlike the bread used in McDonald’s other burgers or sandwiches, making this one of the more unique items on the menu. It’s not a big sandwich, so you might want to order this as a combo meal or order a side of fries, but overall, the flavors work well together, and it’s an ok choice.

According to McDonald’s, McRibs are made of ground boneless pork shoulder emulsified with water, spices, dextrose sugar, and preservatives to refine its flavor and texture.

It has 480 calories, of which 200 of them are fat. It also has 24 grams of protein, 45 grams of carbs, 890 mg of sodium, 80 mg of cholesterol, and no trans fat. The onions and pickles don’t offer a lot of nutritional value, and the bread is white bread with no whole grains, so overall, this isn’t the healthiest sandwich on the McDonald’s menu.

If you like the flavor of the barbeque sauce but wish to skip all the preservatives and extra ingredients, you could make your own using ketchup, molasses, Worcestershire, brown sugar, apple cider vinegar, salt, onion powder, garlic powder, ground cumin, chili powder, and ground coriander. Though if you’re ordering fast food, you might not have the time for all that! You can just tuck that tip away until you prepare your own ribs and BBQ sauce.

Looking for healthier options? Check out our post on 8 healthy McDonald’s choices.

If you’re craving a fast-food semi-rib sandwich on a budget, this might work. It’s a simple sandwich, but it’s not spectacular. The price is fair, it can be eaten as a lunch or snack, and you can eat it on the go. But it doesn’t pack a punch with its flavors, and it’s definitely not a stack of ribs. If you’re super hungry, order something else to accompany your McRib because it’s not very big or filling.

The McDonald’s McRib has been taken off the menu for poor sales, but now, that’s not much of a problem. Due to its limited availability, customers find a sense of nostalgia when it’s available. Maybe it reminds us of the “good ol’ days” in the 80s. If that’s the reason for purchasing one, I’d say go for it. But beyond that, it’s not at the top of my list of favorites, and I’ve not had one since it’s the latest re-release. I prefer bigger sandwiches or real ribs. This one is just so-so for me.

Prices and availability vary by location. You can find a McRib for around $3.69, or you can order it as a combo meal with fries and a drink for around $6. This pricing is consistent with McDonald’s other items like the Filet-o-Fish Sandwich and the Big Mac and is less expensive than most of their chicken sandwich options.

Are you a McRib fan who looks forward to their availability? Or would you rather pass and choose another sandwich from McDonald’s? We’d love to hear your thoughts in the comments below.