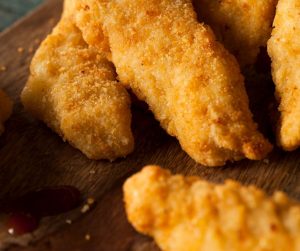 Chicken nuggets, tenders, and sandwiches are all popular menu items in the fast-food world, so what does one have to do to stand out? It would seem McDonald’s technique is to release an item, take it off the menu, re-release it later, take it off, and bring it back. Keeps things interesting right? I’m kidding, of course. Each time the chicken tenders have been released, they’ve actually been better than before. This time, McDonald’s released their Buttermilk Crispy Chicken Tenders with 100% white meat and no artificial flavors or additives, as part of a larger plan to offer healthier, more natural menu options.

I’ve always been a fan of McDonald’s McNuggets, but when they introduced their Chicken Selects in 2002, I was happy for a more homemade chicken tenders taste. However, McDonald’s pulled the Chicken Selects from the menu in 2013, so I simply reverted back to my old ways. The Chicken Selects were brought back briefly in 2015, but they didn’t sell well enough to be on the permanent menu. Not one to give up, McDonald’s developed a new version of the tenders, which was tested in Charlotte, North Carolina, and Alabama, then reintroduced them to menus nationwide under the animal-free name of Buttermilk Crispy Chicken Tenders. Maybe now they are here to stay.

McDonald’s had been searching for a chicken tenders recipe that connected with customers as much as their McNuggets do, while also offering a healthier chicken option. They just may have nailed it with their Buttermilk Crispy Chicken Tenders which are 100% natural with no artificial flavors, colors, or preservatives. This is the same recipe used in the Buttermilk Crispy Chicken Sandwich, which is also a popular menu item.  Marinated in buttermilk and dredged in a spiced coating, these crispy juicy tenders also have a more natural shape than the uniform-shape of the McNuggets.

You can customize your tenders by dipping them in one (or several!) of McDonald’s’ different sauces – Creamy Ranch, Honey, Honey Mustard, Hot Mustard, Spicy Buffalo, Sriracha Mac Sauce, Sweet ‘n Sour, Tangy Barbecue, and a new Signature Sauce. The tenders are available in four-, six- or 10-piece servings. In looking for a spicy version, I found that McDonald’s Spicy BBQ Glazed Tenders feature the Buttermilk Crispy Chicken Tenders tossed in a spicy BBQ glaze, but that’s a whole different taste and menu item.

Buttermilk-battered, breaded, and made with 100% white meat chicken, these tenders are made with no artificial preservatives, colors, or flavors. With so much competition among fast-food restaurants to offer the best chicken to their customers, McDonald’s had to serve tenders that are healthy, inexpensive, and consistently-delicious. Have they done it?

These tenders are crunchy on the outside and moist and meaty on the inside, with a nice balance between meat and breading. With a golden-brown color and a bit of pepper seasoning in the batter, these homestyle tenders are pretty tasty on their own. To really kick up the taste a notch or two, I’d recommend using the dipping sauces. I like Tangy Barbeque with Honey Mustard, but for a 10-pack, you’ll need at least two packages of each sauce.

While these chicken tenders are natural, they are also pressure-fried, and a six-pack has 740 calories. You could go for the nuggets, which are way lower in calories, fat, sodium, and carbs, but the chicken tenders are bigger, more filling, and made with lean, boneless chicken breast. It’s kind of ironic that the tenders, which were added to the menu to offer a healthy meal option, is actually one of the least healthy items on the menu. It’s ok though – you can always balance it out with a salad from the McValue menu.

I find that a six-pack is enough chicken for me, but the tenders can be ordered as a meal with a side salad or fries and a drink for about $6.39, which is a fair deal. The chicken is juicy, the batter is crispy, the portion sizes are perfect, and the sauces are excellent. I think the tenders are fair competition for other fast-food chains serving chicken tenders, and I think they’re worth the price.

The Buttermilk Crispy Chicken Tenders get a thumbs up from me, so let’s hope they stick around – third time’s a charm, right?

You can order the tenders in quantities ranging from four ($3.99) to 10 ($9.99). For comparison, a 10-piece McNuggets is about $3.99, and a Buttermilk Crispy Chicken Sandwich is about $4.89. So the tenders are a bit more expensive than similar items, but you’re also receiving a better quality of chicken and more of it.

With so many chicken options available at McDonald’s now, which will you choose? Let us know in the comments below.