You are here: Fast Food Prices > Reviewing The Grand Mac: Is It As Great As It Sounds? 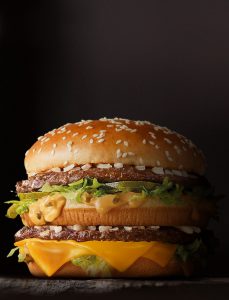 McDonald’s Grand Mac is the oversized son of the Big Mac. I will say this is not something you want to eat while you’re driving – it’s sizeable, and you’ll risk wearing it. But the question I’m here to answer isn’t if you’ll end up wearing a burger. It’s if this blown up Big Mac is worth your money.

If you don’t know what a Big Mac is (it’s okay, I won’t judge you, but maybe don’t tell other people,) it’s a two burger, three bun-eyed monster. It comes with lettuce, onions, a slice of cheese, some pickles, and their special sauce. The sauce, as best anyone can describe, is like mayo mixed with thousand island dressing. Though the “real” secret sauce recipe doesn’t include thousand island, per se, it’s basically the same.

The Grand Mac is the same as their Big Mac, just blown up in size. The Big Mac has two quarter-pound patties, so you’re looking at 8 oz. of meat before they’re cooked. The Grand Mac also has two patties – these guys are each a third a pound, so roughly 10 oz. of meat before they’re cooked. Though the final weight after being assembled and cooked is, thus far, undisclosed. I imagine the sparse sprinkling of veggies and three buns don’t add more than 2 oz though.

History Of The Grand Mac

Most of the Grand Mac’s history can be attributed to the Big Mac, which has a long and surprising history with McDonald’s. It was first created by franchise owner Jim Delligatti, who ran several restaurants in the Pittsburg area back in the late ‘50s. He pitched McDonald’s several times with his burger idea, and each time they turned him down. (Can you imagine how crazy they must feel now?)

Eventually – reportedly on his fifth or sixth pitch – McDonald’s relented and let him sell his burger through his stores in ‘67. Initially, it was released as the Aristocrat – a name that left patrons confused and tongue-tied – and later as the Blue-Ribbon Burger. Both names lacking in a certain je ne sais quoi, no?

Whether you parle Francais or not, most people agreed that the names were duds and it was later rebranded as the Big Mac. After the renaming, the burger took off and was released nation-wide in ’68. Though, at the time, McDonald’s wasn’t as nation-spanning as it is now.

If you’re wondering – since I’m sure you are – Delligatti didn’t receive any additional compensation for his creation from the corporation – but he did get a plaque.

To the credit of McDonald’s, Delligatti’s inspiration for the Big Mac was to increase the profits of his franchise. Since people wanted to pay for his creation, I’m sure he managed to increase his profits. This is probably why McDonald’s didn’t give him any additional compensation – he was a part-owner, after all – so his stores doing better did directly offer him more money.

On a similar note, I have few doubts that the Grand Mac was conceived by America’s seemingly insatiable desire for bigger – since that’s basically all that was improved – while capitalizing on McDonald’s profits. Regardless of inspiration, the Grand Mac was initially released in 2017 in the US. In the UK and Europe, it launched in 2018 as a limited time offer to celebrate the 50th anniversary of the Big Mac.

Unfortunately, Delligatti didn’t get to see his creation reimagined on such a massive scale, having passed away nine years earlier at the age of 98.

Big Big Mac: Is what the Grand Mac is called in Europe.

Denali Mac: Only sold in Alaska, but it’s basically the same thing.

Big Melt: Venezuela’s version of the Big Mac. Instead of a slice of cheese, it comes with a cheese sauce.

The Giga Mac: Sold in Japan, it’s an oversized Grand Mac with three times the meat of a Big Mac. Ooph.

Mega Mac: It’s four patties and an extra slice of cheese. It doesn’t sound like much to me, to be honest, but it’s available in Canada, China, Ireland, Japan, and Malaysia periodically for limited times. It’s a staple item in Turkey, Singapore, Pakistan, South Korea, Thailand, and the UK.

If you’re in the states and want to try it, you can order a Double Big Mac since it’s basically the same thing. Although this item, too, is in limited portions of the US and you may have to pay for two Big Macs and cobble one together yourself.

Also worth noting is the Big Mac BLT, which comes with bacon and tomato. It was originally released in Australia and New Zealand in 2017. And the Big Mac bacon which is what it sounds like – a Big Mac with bacon – which pops up every-so-often as an LTO.  But you can order it anywhere, anytime easily enough.

These burgers are heavy, but they’re not tall.

They’re just really, really, wide and flat. Which means the bun to burger ratio leans towards bun. I get it, tall burgers mean high cook times. But my biggest issue was that I don’t think they give you any extra toppings for this extra meat. And, as someone who views food as a vessel for condiments (judge me if you want), the lack of extra sauce was a huge issue for me.

Ultimately, the experience boiled down to getting more bun-per-bite than anything else. And I just can’t with all that bread.

It’s not that any one part of this burger was bad, just that proportions felt out of whack. And, yeah, you could ask for extra – but my personal belief is that if I need to modify something, it loses a star. I feel like that’s only fair.

Nope. And if you’re anywhere near a diet – unless it’s keto – the Grand Mac isn’t gonna vibe.

Additionally, it does contain eggs, wheat, soy, sesame, and milk if you have food allergies. It may or may not encounter other allergens like tree nuts, fish, and shellfish – so it’s still worth checking with staff and erring on the side of caution if those are an issue for you.

The Grand Mac costs somewhere in the range of $5.50, depending on where you are. The Big Mac (as a point of reference) costs about $5. Is it worth the extra 50 or so cents?

I’m torn. If you’re hungry and you know a Big Mac isn’t going to be enough, yeah, it’s totally worth the extra quarters. If you’re curious, I’d also say why not try it? But for the average person who wants a decent burger? I’d stick with the Big Mac.

Again, it wasn’t bad, it just wasn’t what I wanted it to be – for the bigger, better version of the Big Mac, or as a burger itself. But I do see the promise that it has. With extra toppings, thicker patties, bacon, and – of course – extra sauce, I think it would’ve gotten a much higher rating. The extra sauce is important.

What’d you think of the Grand Mac? Let us know in the comments if it lived up to your expectations or shattered your burger-lovin’ soul.