You are here: Fast Food Prices > Taco Bell’s Gordita Crunch: Is It Worth Your Money? 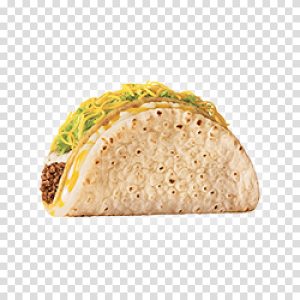 Taco Bell isn’t exactly known for authentic Mexican food. They’re known for fast, cheap, Mexican-inspired(ish) gimmicks. The gordita is a good example of an early-stage gimmick. Authentic gorditas bear little resemblance to Taco Bell’s version – they’re much thicker and more like a corn cake pita where the stuffing is, well, stuffed in the pocket. But the gordita crunch from Taco Bell is basically a taco wrapped in a flatbread.

There’s not much going for it and, to be honest, that’s why I’ve never been inclined to try it. But today I embark on this taco testing journey for you. But I get a taco out of the deal, so I guess I have that going for me. (Technically “gordita”, but I’m not gonna slice hairs about it.)

On the inside, you have your standard beef, lettuce, cheese, and this mayo-like sauce stuffed into a crunchy taco shell. They say the sauce is a ranch sauce, I beg to differ. Moving onto the outside you have a flatbread glued to the hard shell with cheese. I tried chicken, steak, and beef – it was the best with the beef, so I would suggest sticking with the gordita as is.

The original gordita hit Taco Bell, as best we can tell, in 1998. That makes it a staple there for over 20 years now. Since then it’s spun off other variants like the bacon gordita, the Baja gordita, the cheesy gordita, the double cheese gordita, and literally dozens of others.

But in the early days of gorditas, they didn’t have the hard shell that was glued on by cheese, they had the flatbread for the outside. It looks like they later deep-fried this version and called it a chalupa, which is a bit closer to its Mexican origins than their gordita.

Along with the addition of the hard shell, a few other tweaks have been made. Primarily a removal of toppings like tomatoes, beans, and corn. Which kind of bums me out, because the originals from the 90’s look better. Also anticlimactic.

This is an old menu item from Taco Bell, and we can’t quite figure out exactly what the inspiration was. The most logical, to me, is the gimmicky nature of Taco Bell mashed up with real-world Mexican fare. Their old commercials (in the days of the chihuahua, if you can believe it) seems to support this theory.

There is another theory that goes in a slightly different direction. In 1993 Chipotle started opening their doors and Qdoba opened for the first time in 1995. Though neither of them reached any significant traction until the late ’90s and early 2000s, this started a taco war in the fast-food sector. Taco Bell, attempting to keep their standing, started launching some odd creations around that time. When I say odd, I’m talking BLT tacos, seafood salads, and sloppy Joes.

And, to be honest, it’s kinda confusing and seems unnecessarily complicated.

If you like Taco Bell’s normal crunchy tacos, you’ll probably love their gordita. It’s a bit more bready than expected and in the crunch version, the bread is a bit overpowering. The double cheesy version felt like a much bread to filling ratio. As far as the taste goes, I think their ranch sauce was a bit like a mayo and sour cream mix. I didn’t get a ton of ranch flavor in there. Everything else in the gordita, if you’ve ever tried Taco Bell’s anything ever, tastes like you’d expect it to.

The beef was the best way to go. I’m not sure if it was the amount of seasoning they use or if it was a texture thing – possibly both – but the chicken and steak fell flat and they were lost in the bready-ness of the gordita.

They’re relatively low in carbs and high in protein. They are, however, through the roof – as you probably guessed – in fats and sodium. In a surprising twist, it does have a decent amount of vitamin A and an alright level of fiber for something that seems, for all other purposes, a lot like empty calories.

They’re definitely not terrible for you unless you have a sodium issue. But I wouldn’t tell anyone they’re healthy, either.

They’re a pretty average-priced item for Taco Bell, hovering somewhere in the $3 range (depending on your location.) So, with that in mind, they’re not a bad deal – but I think there are other things on the menu that are more deserving of your attention (and cash!) that are a pretty good deal.

The XXL grilled Stuft burrito clocks in at about the same price, is much more filling, and comes in a much more portable package. If you don’t care about making a mess all over your lap (and probably car,) then who am I to stop you? But for me, the cleanup time did factor into the value. They might be worth the price, but the time to clean up my car and clothes?

There was nothing notable about Taco Bell’s gorditas one way or another. For me, they ultimately fell in the middle lane of mediocrity. If they hadn’t ruined my favorite pants, I’d probably go back to forgetting about them in a week. And, yes, my pants did factor into this rating, as much as I tried to put it behind me, I just can’t forgive them for that.

If you want to grab something cheap, the $5 Fill-Up box with these guys are super filling and a great value, but if you’re looking for something healthy, delicious, cheap, filling, or a great value that aren’t going to ruin your favorite pants – these aren’t it.

What did you think of the gorditas? Got a secret recipe that makes them worth it? We want to know, so hit us up in the comments!