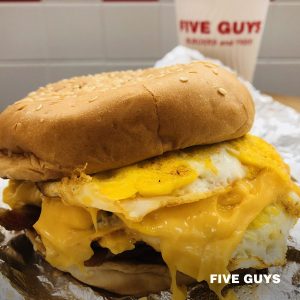 Five Guys is a fast-casual restaurant chain in the US and UK that sells hamburgers, hot dogs, and French fries. The restaurant is known for its large portions, quality food, and reasonable prices, but now it’s joined the ranks of fast-food restaurants that serve breakfast. The only catch is, breakfast is only offered at select locations and some airports. If you’re anywhere near a location that has breakfast options, it’s worth a try. Let’s find out what the breakfast menu looks like in this Five Guys Breakfast review.

In 1986, Jerry Murrell opened a burger restaurant in Arlington, Virginia, named after himself and his four sons. However, a couple of years later, he had another son, so Jerry claimed the restaurant was named after his five sons, excluding himself. That still works, right?

The idea of the restaurant was simple- sell hand-formed fresh-ground beef and fries cooked in peanut oil. Also, no freezers were to be used- only fresh ingredients. As each burger was made to order, they offered complimentary shelled peanuts as something to snack on while you waited. Over the next 20 years, Jerry opened several more locations, expanding across state lines and eventually in the UK. While they have an impressive following of burger lovers, Five Guys began offering breakfasts in 2019 as an answer to growing requests from customers in big cities and airports. Not straying far from their regular menu, Five Guys’ breakfasts include breakfast sandwiches that include eggs, cheese, or bacon.

The breakfast menu is served between 8-10:30 am daily at a few locations, and it includes four breakfast sandwiches. Combinations include the bacon, egg, and cheese roll with apple-wood smoked bacon, two eggs, and melted American cheese. Or you can order a plain egg roll. Generous portions of Five Guys’ hand-cut fries can also be ordered with any breakfast item.

Start your day with one of the following classic breakfast options:

True to their nature, Five Guys loads their breakfast sandwiches just like they load their burgers. The buns are soft and the eggs taste much better than some of those yellow rubbery egg circles you might find at other fast-food chains. The crispy bacon gives the sandwich a much-needed crunch in the bite. The grilled onions are sweet and caramelized, and the grilled mushrooms had a nice savory flavor as well. My only complaint would be that the ingredients make the sandwich too soft, and I like a nice firm bite in my sandwiches. I added salt and ketchup to mine- I know, ketchup on eggs- it’s a Texan thing. Nothing about the breakfast sandwiches stand out to me, but they are a good option if you’re near a Five Guys and want a big breakfast portion to start your day.

The burgers are made with fresh ground beef and the fries are cooked in peanut oil. Burgers and fries quickly add up in terms of calories, saturated fat, sodium, and cholesterol, so if you’re following a strict diet plan, Five Guys may not be the best option. But consumed in moderation or for special occasions, it’s a good option.

I like the Bacon, Egg, and Cheese Breakfast Sandwich, but I’d probably only choose it again if I was in an airport and a Chick-Fil-A wasn’t available. Even though the portion sizes are generous and the prices are reasonable, it’s not my favorite breakfast option. Five Guys doesn’t have any plans to add other breakfast items to their menu, so it’s likely that they’ll continue their legacy as a quality burger joint.

Five Guys’ breakfast options aren’t super creative or innovative, but they are made with high-quality ingredients and there are lots of topping options. The 15 sauces and extra toppings Five Guys usually has available for their hamburgers are also available with the breakfast sandwiches. It’s a decent option, so I’d recommend trying the breakfast at least once.

This nutritional information is based on one Bacon, Egg, and Cheese Sandwich.

Each breakfast sandwich is priced under $4. You can even add a hamburger patty to yours for $1.50, and the extra toppings are free. These include The topping choices include mayo, lettuce, pickles, tomatoes, grilled onions, grilled mushrooms, ketchup, mustard, A.1. Steak sauce, Bar-B-Q sauce, hot sauce, relish, onions, jalapeño peppers, and green peppers.

What do you think about our Five Guys Breakfast Review?

Have you tried one of Five Guys’ breakfast sandwiches? Which combination of toppings is your favorite? We’d love to hear your thoughts in the comments below.