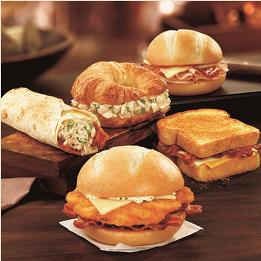 Dunkin’ Donuts has branched out in their food and product offerings over the last few years. Since 1950, they’ve been a favorite stop for all-day coffee and donuts, and they’ve grown into being one of the largest coffee and baked goods chains in the world. In keeping up with the demands of their customers, they’ve continued to evolve, adding other breakfast items and even some interesting lunch and sandwich options to the menu, including the Tuna Salad Sandwich.

In 2009, Dunkin’ Donuts launched a new lineup of chicken and tuna sandwiches in a few locations in New York. Meant to create quick, quality menu options to encourage customers to come in throughout the afternoon, the sandwiches were received well, and eventually expanded into locations across the country. The Tuna Sandwich features fresh tuna salad on an oven-toasted bagel and can be served with or without the cheese.

The introduction of the new Chicken and Tuna Sandwiches gave customers extra choices in their busy lifestyles. Many people are on-the-go, and their eating habits and expectations are changing. So Dunkin’ Donuts was inspired to give their customers fresh choices without compromising on convenience, quality, or taste. By expanding their menu variety of afternoon offerings, Dunkin’ Donuts customers have more options at any time of day.

This is a pretty simple, straight-forward sandwich- tuna salad on a toasted bagel or croissant. The tuna salad is blended with mayonnaise, celery, and spices, and served cold or as a melt with Wisconsin-aged white cheddar cheese.

At first glance, the Tuna Salad Sandwich isn’t aesthetically pleasing. The tuna is heavy on the mayo, so it looks a bit liquidy and white. However, once you get past that, the chunks of tuna are sizeable and fresh, and the celery pieces provide a nice crunch, but the overall feeling of the tuna is “mushy”. The seasoning wasn’t overpowering- in fact, it could use salt. But that’s an easy fix. I liked my sandwich to be toasted and served as a melt with cheese. You can order it cold, and the bagel or croissant can be toasted or not. But I prefer the warm version. Both the bagel and the croissant is the same type Dunkin’ Donuts uses for their other breakfast sandwiches, so this was not new. The bagels are fresh and soft, but I prefer them toasted, which helps hold all the tuna inside- otherwise, this sandwich can get messy. The croissants are a bit sweeter and flakier than the bagel, adding a nice flavor to the sandwich.

While you might think tuna salad is a healthy lunch option, this tuna is highly processed, contains over 45% of the recommended daily amount of sodium, and contains sulfites, fat, and almost 600 calories. The celery has some nutritional value, such as antioxidants, vitamins, and minerals, but there’s not enough in each sandwich to make a big impact.

If you like mayo, this is the perfect sandwich for you. If you don’t, I’d skip it. Taste-wise, it’s decent- about the same as you might make at home from a can of tuna (though I add more veggies and salt to mine at home).  It’s ok for getting a quick bite to eat on the run, as it’s fresh and easy, but it’s missing the vibrance and crispness of a true deli-style tuna sandwich.

On the plus side, the tuna is plentiful and chunky, and the celery provides a little bit of crunch. They’re also easy and fast to prepare so if you’re in a hurry, you’ll be in and out in just a few minutes. On the other hand, there’s a lot of mayo, which makes the sandwich feel heavy. There isn’t a lot of celery, there are no veggies like lettuce or tomatoes, and the tuna is missing a certain deli-fresh vibrance. It’s an average tuna salad sandwich with an average price tag.

Have you tried Dunkin’ Donuts’ Tuna Salad Sandwich? Was yours heavy on the mayo too, or was the tuna-to-mayo ratio more balanced? Let us know in the comments below.