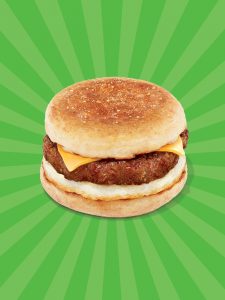 For a while, people were convinced plant-based fast food was a fad that would phase out eventually – but it looks like it’s here to stay. Franchises all over the country are offering plant-based and meatless options to their menus, discovering that their customers appreciate the option. Dunkin Donuts is one of the franchises that’s added a plant-based breakfast sandwich to their menu, and since its release in Manhattan stores a year ago, it’s grown in popularity in locations all across the US.

In July of 2019, Dunkin’ Donuts debuted the Beyond Sausage Sandwich and its partnership with Beyond Meat in a New York-based launch. Beyond Meat is best known for its Beyond Burgers, which looks and tastes similar to ground beef. However, this new release is a breakfast sausage, made with 100% plant-based proteins and a mix of spices created just for Dunkin’ Donuts.

In promising attempts to improve its reputation and meet its customers’ expectations, Dunkin’ Donuts rebranded itself as “Dunkin,’” added a new espresso line and protein bowls to its menu, and created a partnership with Beyond Meat for their Beyond Sausage breakfast sandwiches. If you like your meat alternatives to mimic the flavor and texture of meat versus the plants they’re made from, Beyond Sausage is a delicious choice. It seems this partnership is the beginning of a promising future in the fast-food space.

The sandwich is made with a plant-based Beyond Breakfast Sausage patty, served with an egg, and a slice of melted American cheese on an English muffin. This, of course, is a vegetarian option, but you could ask for a vegan-friendly version without the egg or cheese and save a little cash too.

The sausage patty is made with peas, mung beans, rice, and sunflower to provide the protein and coconut oil to ensure juiciness.

The Beyond Sausage Sandwich is big and bold – surprisingly bigger than I expected. The sausage itself is chewy – more like a sausage patty than a veggie/bean patty, which I appreciate. It’s a bit heavy on the salt and spices, but this is a good thing too, as a lot of plant-based meat alternatives taste bland to me. Along with the sausage, the sandwich features a fried egg and a slice of melted American cheese. All bundled up inside of a fresh English muffin, and I have to say I was impressed. The sandwich is warm, flavorful, savory, and packed with about 10 grams of protein.

Dunkin’ points out that the Beyond Sausage Breakfast Sandwich has 29% less total fat, 33% less saturated fat, and fewer calories, cholesterol, and sodium than a traditional Dunkin’ Sausage, Egg, and Cheese Breakfast Sandwich on an English muffin. However, even with these improvements, it’s not considered particularly healthy because it also packs eight grams of saturated fat and 910 mg of sodium. It’s great to have a meatless option on the menu, but if you want to balance out the meal, you could add some fruit or veggies.

Keep in mind that if you have food allergies or specifications, the sandwich does contain egg, milk, soy, and wheat.

Dunkin’s Beyond Meat breakfast sandwich is a delicious addition to the growing list of plant-based fast-food alternatives. The price is fair, the serving size is just right, the egg is well-cooked but not rubbery, and you feel full after eating this sandwich, rather than feeling heavy. It does offer nutritional improvements over other fast-food menu items, and it’s served fresh and hot. I’d say it’s worth it.

While the Beyond Sausage Sandwich doesn’t taste as good as real meat to me, I enjoy the occasional meatless alternatives. It’s an excellent option for vegetarians, and I know several people who keep this sandwich in their breakfast rotation options.

As far as plant-based meat alternatives, what do you think of the Beyond Sausage Sandwich? Have you tried any other products by Beyond Meat? How do they compare to typical meat options?