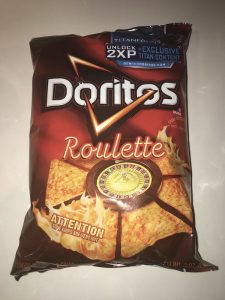 Who can resist that orange-dusted flavor of Doritos, especially if you throw in the elements of anticipation and surprise? The days of reaching into a chip bag only to pull out the same flavors are over. Doritos came up with the fun idea to toss in a few surprise spicy Doritos in the bag with nacho-flavored Doritos. The tricky part is that all of the Doritos look the same, so you can’t tell which one is regular and which one is flaming hot. The Russian roulette of Doritos is appropriately called Dorito’s Roulette, and it’s a game I’m happy to play. If I “win,” I get a spicy chip; if I “lose,” I get to keep enjoying nacho-flavored Doritos until I find the spicy one. Either way, the bag doesn’t last long. Let’s dig into this Doritos Roulette Review.

Doritos means “little golden things” in Spanish. Well, kind of. While the name has been said to mean “little golden things” by Frito-Lay executives, it’s actually a combination of the Spanish word for gold, “oro,” with Frito’s suffix “-ito” and tacked a “D” in front because why not? The resulting Doritos was approved, and it’s been the name of these delicious tortilla chips ever since.

In their first commercial advertisement, the original catchphrase said, “They taste as good as they crunch,” and that still holds true today. Originally made as a simple, salted tortilla chip in 1966, the first flavored Dorito wasn’t invented until a year after the first release. It was lightly dusted with taco seasonings, and the Dorito remained this way until 1974 when Nacho Cheese Doritos were introduced with three main flavors: Romano cheese, garlic powder, and salt. The bright, cheesy chip quickly became a favorite, and now it accounts for half of Doritos’ sales.

Since the early days, there have been well over 100 different flavors, ranging from classics, like Spicy Nacho and Cool Ranch, to wacky with flavors like Late-Night Cheeseburger and Mountain Dew. Which one is your favorite?

You’re only going to find a nacho cheese Dorito or a super spicy Dorito in this bag. But you can find the Doritos Roulette in various sizes, from a 3-oz single serving to an 11-oz bag fit for you and a friend to the 15-oz party bag.

You can’t tell by smelling or looking at the chip, so the idea is to take a handful of Doritos and expect at least one spicy Dorito for every few nacho Doritos. It’s a fun game in anticipation, waiting for that one spicy Dorito, but is it a flaming hot spicy chip, or is it a mild spice?

I like to open the bag and give it a good shake. The first Dorito is what I’d expect- a nice nacho-flavored Dorito with its classic seasoning. Chip numbers two and three were the same. But chip number four was the magic Dorito- it’s a slow heat coming on, but a few seconds later, my mouth was on fire. The burn just kept coming, so I tried to ease the heat by eating a few more Doritos. But three chips later, my mouth was on fire again- a fun kind of fire that made me laugh.

The first ingredient on the Doritos list is corn, but it’s actually genetically modified corn, which is linked to allergies, inflammation, and disorders affecting the digestive and reproductive systems. Consistent inflammation can lead to diseases and issues like diabetes, migraines, mental illness, Celiac disease, asthma, and arthritis. A lot of the flavoring comes from Mono-sodium glutamate (MSG), salt, and sugar, a combination that can cause issues when overconsumed. The classic orange shade of the Doritos is due to hydrogenated oils and dyes, including Yellow dye 5, Yellow dye 6, and Red dye 40, which can each be harmful to your body. Just one serving of Doritos Roulette can have 210 mg of sodium, but let’s be honest- how many of us only eat one serving of Doritos? It’s so hard to stop once you get started.

Well, besides the health risks associated with overconsumption, Doritos Roulette are so much fun. They make for fun conversation, and they can be used in group games or challenges. They’re not too easy to find, so they feel like a treat when you come across them, and if you have guests or friends over, they’ll get a kick out of watching the faces of those who get the spicy chips. That, alone, is worth it!

The Doritos Roulette are fun for sharing with friends- who gets the spicy chip first? There’s a level of mystery and anticipation, which makes it more enjoyable than eating the same chip over and over. I also like bags of mixed chips to change things up and give flavor variations in each bowl. I love the flavor of the nacho Doritos, and I especially enjoyed the spicy roulette Dorito. There’s about one spicy chip for every three to five nacho Doritos, so pop open a bag and play. I’d recommend having a drink nearby.

This information is based on a single serving of Doritos Roulette.

You’ll find Doritos Roulette priced anywhere from $1.49 for a small bag to nearly $5 for a party-size bag.

That sums it up for this Doritos Roulette Review. Would you try a bag? If you’ve already tried them, did you share a bag with a group of friends? We’d love to hear how you played a fun game of Doritos Roulette! Let us know in the comments below.