Del Taco is a West Coast favorite, serving Mexican fast food from tacos to burritos, quesadillas, and nachos. The restaurant has built quite the cult following over the years, and its loyal fans know all the hacks to use when ordering from the menu. In fact, customers over the years have developed their own dishes that are so good, they became part of the Del Taco Secret Menu, and we’ve got all the inside hacks to share with you today.

Many of the Del Taco Secret Menu items have been around for several years, so most workers will know what you’re talking about when you order the Stoner Burrito (yes, it’s a thing!). However, it should never be expected of Del Taco employees to know exactly what makes up these orders, so use this list as a guide to explain it to them. According to our readers, they will make these secret recipes more often than not.

The Stoner Burrito is an iconic secret menu item. Over the years, it has been talked about so much that it might as well be on the regular menu. Del Taco’s Stoner Burrito is stuffed with beans, cheese, and crinkle-cut fries, and then drizzled red sauce and secret sauce. If you’re not into beans – don’t worry – Del Taco has plenty of other options that are great for when you have the munchies. Feel free to ask for chicken or another protein, as well.

For a fast food joint, Del Taco has tons of options for dessert, including delicious milkshakes. But, their flavor lineup only includes vanilla, chocolate, and strawberry, so customers thought of the brilliant idea to spice it up a bit. Because the restaurant also serves Chocolate chip cookie, ask for one blended with a chocolate shake. It’ll turn out to be like a blizzard from DQ – but better.

The Bun Taco is one of those secret menu items that used to be on the regular Del Taco menu, but it was basically a lifetime ago, so no one really knew about it until the franchise brought it back for their 50th anniversary. After being released for a second time in 2014, the Bun Taco made it onto the temporary Throwback Menu. So, what is the Bun Taco, anyway? It’s essentially a Del Taco in the form of a burger. Skip the crunchy shell and replace it will a bun.

This shake was also apart of the Throwback Menu that came out the summer of ’14. During Del Taco’s earliest years, the Orange Shake was wildly popular, and customers are still trying to get their hands on one – even though it’s not technically on the menu. It’s essentially the milkshake-version of a dreamsicle that can be closely replicated by blending a vanilla shake and orange Fanta.

It hasn’t been on the menu in years, but fast food chains are all about the return of cult classics, so keep your fingers crossed.

The Combo Cup is basically a walking taco, except for it’s not inside a Fritos bag. Instead, you’ll get a cup with a layer of Del Taco’s signature beef and beans, sprinkled with some cheddar cheese and red sauce. To finish it off, you’ll get tortilla chips that you can crunch up and mix into it, or use it to scoop the ingredients out.

For a restaurant with the word “taco” in it, the underground menu really doesn’t have much to do with tacos at all. It most-closely resembles the Breakfast Toasted Wrap, but instead of a soft tortilla, the Breakfast Taco is in a crunchy shell. Try it with a base of hash browns and scrambled eggs with cheese and salsa on top.

Del Taco has a whole menu page of burritos, so why do we need another? If you’re questioning it, you’ve clearly never had the Cheese Burrito before. Its simplicity is what makes it one of the best dishes on the Secret Menu. It contains Del Taco’s signature red sauce and cheese with a creamy layer of sour cream. 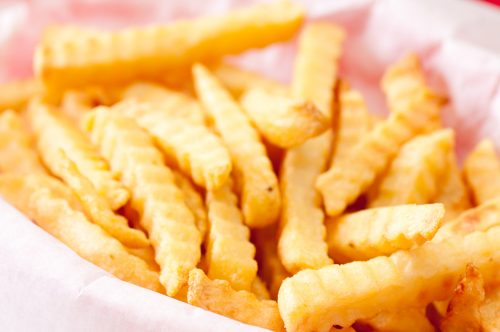 Okay, now onto our absolute favorite part of the Secret Menu. If you’re wondering what “go bold” means, you’ve probably never been to a Del Taco before. It’s the code phrase for turning any ole menu item into a fast-food masterpiece, loaded with crinkle-cut fries and secret sauce. Going bold makes any Del Cheeseburger just a tad heartier, and any quesadilla more filling.

According to our friends at FoodBeast, some of the best items to go bold with are:

Going bold will cost you around 50 cents extra, though prices may vary. This is one of the most well-known secrets at Del Taco, so most workers will know what you’re talking about when you try to order it.

The Green Bean Machine does not have green beans in it, despite the name. It’s a delicious breakfast burrito that contains scrambled eggs, cheddar cheese, beans, and Del Taco’s green sauce. This one is fairly easy to ask for because most locations will carry the ingredients for the Green Bean Machine, even though it’s technically not on the menu.