Enchiladas are a popular Mexican food dish, similar to burritos, except enchiladas are usually baked, smothered in sauce, and must be eaten with a fork. One of the tastiest enchilada recipes comes from Carlos O’Kelly’s, a chain Mexican restaurant in Iowa, Kansas, and Nebraska. They’re famous for their queso and their salsa, but they have lots of other delicious options. In this Copycat Carlos O’Kelly’s Enchilada de Monterrey, you’ll learn how to make your own version of this dish.

First, you’ll cook the chicken thighs, and then you’ll prepare the enchilada filling. You might notice that this recipe takes quite a bit of time. Don’t let that discourage you. most of the time is spent allowing the chicken flavors to marinate. Try to leave it in the fridge for eight hours, but if you can’t wait that long, give it at least three hours. The enchilada sauce is fairly simple- you’ll just add the ingredients to a pot and let them simmer. Once all of the components are ready, you’ll fold the ingredients into large flour tortillas and drench them with the sauce. Allow them to cook for about 25 minutes, and then top them with cheese and sour cream.

This savory, flavorful Mexican dish will be a big hit, and you’ll likely have sauce leftover for another meal. 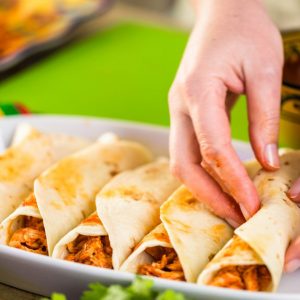 For the Enchilada Filling

For the Cheese Enchilada Sauce

For the Enchilada Sauce

Putting Together the Enchilada de Monterrey

If you liked this Copycat Carlos O’Kelly’s Enchilada de Monterrey, and now you’re craving Mexican food, we’ve got you covered. Check out our post on the Top 10 Best Mexican Fast Food Joints.