Chick-Fil-A ‘s menu is ever-expanding, but even with the latest additions like Mac and Cheese and Chicken Tortilla Soup, customers are always curious about the existence of a secret menu. So, is there an underground list of menu items that only the truest of Chicken-Fil-A fans know about?

According to Chick-Fil-A, there is no secret menu… But don’t panic. All a secret menu really is is taking already-existing items from the regular menu and combining them to create a new dish. So while there may not be an underground menu that all Chick-Fil-A employees know about, there are plenty of “secret” dishes that you may be able to order from the fast-food chain. Some of them you can ask for when you order at the drive-through or counter, but others are more DIY-style. 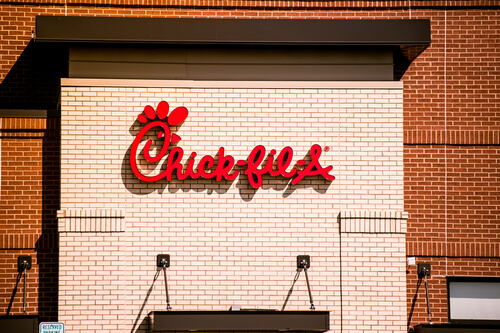 When attempting to order Chick-Fil-A Secret Menu items, just remember that not all locations will know about every dish on the list. You may have to ask for specific ingredients and explain what you mean because ultimately, employees are not responsible for knowing how to make food from the Secret Menu. Many of these creative dishes have been developed by customers, with the exception of a few that Chick-Fil-A concocted themselves.

The Spicy Chicken Sandwich is one of the most popular items on the regular menu, but what about a grilled alternative? There isn’t one unless you order the secret one. The Spicy Grilled Chicken Sandwich, which is also known as the “Spicy Char” is a grilled patty with spicey seasoning. Add pepper jack cheese and Sweet & Spicy Sriracha to amplify the heat.

Supposedly, many workers will know what this is when you order it under the name Spicy Char.

Out of all the items we have on our secret menus list, this one is by far the most beloved by customers. Combining all of the fast-food restaurant’s best-sellers, you’ll be stuffed by the time you finish your Loaded Chicken Waffle Fries. To order them, ask for a 12-count nugget, large waffle fries, pepper jack cheese, and buffalo sauce. You’ll want to request a salad bowl so you can assemble this dish once you receive your order. First, spread out a layer of waffle fries on the bottom of the bowl. Then, sprinkle the nuggets and cheese on top and finish off with smothering in buffalo sauce.

The Buffalo Chicken Sandwich is another easy DIY creation. Simply order a chicken sandwich and plenty of buffalo sauce (ask for extra to ensure you have enough). Once you get your sandwich, remove the patty, cover it with the sauce, and reassemble it.

This DIY dish is a combination of a few breakfast menu Chick-Fil-A items and is inspired by the company’s blog. All you have to do is order the breakfast Chick-N-Minis, along with hash browns and your go-to dipping sauce. Coat the hash browns in the sauce and layer them onto the sandwiches.

Chick-Fil-A is known for its delicious milkshake flavors, but this one’s not technically on the menu. To order the Blueberry Cheesecake Milkshake, simply ask them to blend a slice of the cheesecake with the Vanilla Milkshake (that’s made with Ice Dream). Only select locations have the dessert available, so you’ll have to double-check before you order this one.

No secret here… You all know what a Root beer float is – it’s just not on the Chick-Fil-A menu. However, if you ask for one, they may grant your wish will a cup full of root beer and a scoop of Ice Dream.

The Chicken Club on the regular menu is made with a grilled chicken patty, but sometimes all you want is a little fried chicken. Most local Chick-Fil-A restaurants will accommodate this Secret Menu order because all you’re asking them to do is swap the grilled chicken with a crispy chicken patty.

If the name of this one sounds familiar, you probably recognize it from KFC’s “Double Down” sandwich, available on their menu from time to time. It’s an intense-looking thing – two chicken patties replace the buns, and the inside is stuffed with all the toppings. If you’re brave enough, you can order this sandwich outright. If not, you can always order two chicken sandwiches without the bun and assemble it yourself.

This may be one of Chick-Fil-A’s best-kept secrets. You can get yourself a free IceDream cone when you order a kids meal. Just ask them to swap the toy for the cone – it’s as easy as that!

This dish is inspired by Jimmy John’s Unwich, which is just a normal sub that is wrapped in lettuce instead of bread. You can order any sandwich at Chick-fil-A this way – just ask the worker for a side of lettuce and no bun.

The fast-food joint gave us the brilliant idea to combine two of our favorite Chick-Fil-A desserts – Icedream and Chocolate Chunk Cookies. Order both separately, scoop the ice cream onto one cookie and top it off with another to create a chocolate chip ice cream sandwich.

Keep in mind, it is not a guarantee that Chick-Fil-A will honor your request because most of these items are dreamed up by customers, not the restaurant itself.