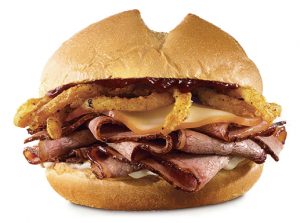 In 2016, Arby’s released its Smokehouse Pork Belly Sandwich, which quickly became one of their most popular sandwiches. In fact, it sold out in many locations across the US in just a few weeks. Thanks to the positive reviews from customers and continuous requests to bring it back to the menu, Arby’s re-released the Smokehouse Pork Belly Sandwich for a limited time in 2017. It’s not currently on the menu, but it’s so popular that social media pages are dedicated to bringing it back again. Let’s see what all the hype is about in this Arby’s Pork Belly Sandwich Review.

Pork belly is, of course, cut from the belly of the pig. It’s high in fat and big in flavor, and if you’re a bacon-lover, this meat is impossible to pass up. It’s not one of the most popular cuts used in fast food, though, so Arby’s has a one-up on its competition there. In 2004, New York’s Momofuku started using it as an inexpensive filling for pork buns, and a few years later, a sandwich shop in Portland used it in their Cubano sandwiches. What Arby’s work in their favor is that they’re not afraid to experiment with different cuts of meat, and we’ve seen that with some of the interesting sandwiches, including a lamb gyro, a venison sandwich, and a pork belly sandwich in 2016. Arby’s says the Smokehouse Pork Belly Sandwich became one of its most popular sandwiches, and the initial release exceeded the chain’s wildest expectations. It’s no wonder the sandwich made a swift return a year after the initial release. Why it’s been discontinued, well, we’re all asking that question!

The pork belly was rich, fatty, and smoky with a light sweetness. The meat was mostly tender and not as smokey as bacon because it’s smoked differently. The sauce is tangy and surprising combined with the smokey sweet flavors of the meat. The crispy onion strings offered a light crunch and charred onion flavor, which gave the sandwich a nice bite. The cheese is melted on top of the smoked pork belly, and while it’s not a big cheesy addition, it’s just the right amount- not overpowering but not easily lost in the other flavors. However, the mayo could be missed, but it’s easy to make up for that with horsey sauce, which I definitely recommend. It makes this a powerfully delicious sandwich overall.

Arby’s pork belly sandwiches are not exactly healthy. They have high protein content, but they’re also full of calories, fat, and carbs. It’s a loaded sandwich, so you’ll feel full after eating it- you might even feel a little heavy and sluggish, albeit satisfied. This is a sandwich for indulging and satisfying a craving, but it shouldn’t be consumed regularly. But Arby’s has you covered there since it’s only offered sporadically for limited periods of time.

The Smokehouse Pork belly Sandwich is one of those meals you pine over and wish you could get your hands on again. All of the ingredients work well together, and the pork belly is smoked to perfection. With fresh meat, soft bread, a crunchy onion bite, and sauce, it’s a delicious sandwich- especially for a fast-food restaurant. It’s definitely worth it.

I really enjoyed the taste, texture, and uniqueness of the smoked pork belly. I loved the mix of bbq sauce and horsey sauce that I added after I ordered it, and I’m a big fan of crunchy onion strings. You’d want to be sure to have napkins, toothpicks, or dental floss on hand because it can get a bit messy, but it’s worth it.

The Smokehouse Pork Belly Sandwich is offered at a fair price of $5.69, which is a bit more expensive than some other sandwich choices. But it’s similar in price to the Smokehouse Brisket, the Angus Three Cheese & Bacon Sandwich, and the Roast Turkey Ranch & Bacon Sandwich. For the cut and quality of meat, it’s a reasonable price. If you’re looking for a value meal, Arby’s offers several combo meals with fries and a drink between $5 and $6.

Have you been one of the lucky ones to catch Arby’s Smokehouse Pork belly Sandwich when it’s been available? Are you one of the pork belly fans waiting patiently for a re-release? Let us know your thoughts about this sandwich in the comments below. If you enjoyed this Arby’s Pork Belly Sandwich Review, check out some of the interesting options on Arby’s Secret Menu.