If you’re looking for a rich dessert to indulge in, this Applebee’s Copycat Blondie recipe should be at the top of the list. It’s full of rich, buttery brown sugar and maple flavors, and it’s served with a scoop of vanilla ice cream over the top. It’s a simple recipe, and whereas some deserts require a lot of time and precision, this one doesn’t take long to prepare or bake. It’s a winner for kids and adults alike.

The Applebee’s “blondie” is a blonde-colored brownie instead of a brown brownie. The consistency of a blondie is about the same as a brownie – rich, dense, and chewy. The difference is that this recipe is made with brown sugar, butter, and vanilla, rather than cocoa, giving it a butterscotch flavor instead of a chocolate flavor. It can be made with or without nuts, though the recipe we’re sharing below calls for nuts. This recipe yields the perfect crispy flaky top with a gooey center, and once you add the ice cream and homemade maple butter sauce, it’s a delightful treat.

You can store the blondies in the fridge in an air-tight container for a few days, though there are never any leftovers around here! 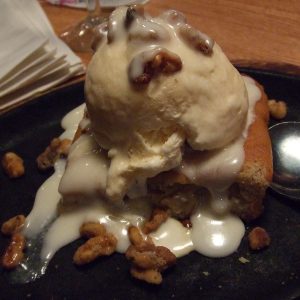 As you might have guessed, the Applebee’s Blondie isn’t the most nutritious thing on the menu. If you really want to “Eat Good in the Neighborhood”, check out this Pub Diet Menu available at Applebees now.