You are here: Fast Food Prices > Review: Burger King’s Angry Whopper Is Back 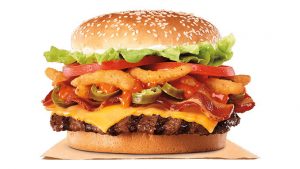 How does an Angry Whopper make a happy customer? For over 60 years, Burger King has been known for making orders “just the way you like it”, so they are always looking for ways to spice up their menu variations. Or in this case, bring one back!

Yes, the Angry Whopper is back on the menu, so fans of the signature Angry sauce can enjoy it once again for a limited time.

So what is the Angry Whopper?

The word “angry” is meant to give the impression of a spicy hot burger that will rile your taste buds and set your mouth on fire… but the Angry sauce is more zesty. Like chipotle sauce. And the jalapeños are canned slices, so they are missing some of their natural fresh spice. Both left a lot of spice to be desired.

It is interesting to note that the type of cheese served varies between countries. For example, franchises across the US serve American cheese. Franchises across the UK serve pepper jack cheese. And believe it or not, I tried my very first Angry Whopper in Cozumel, Mexico, where Manchego cheese is the more common sandwich cheese. Double and triple patty variations are also available.

History: Where did the Angry Whopper come from?

In 2008, Burger King released the Angry Whopper for a limited time in the UK, making its way into franchises across the US in 2009. With its flavorful kick, but lack of true spiciness, the Angry Whopper was later discontinued and followed up by the Angriest Whopper in 2016, served with a spicy-sauce-infused red bun.

The Angriest Whopper packed a bit of heat, but excitement over this option fizzled out. Burger King found through their advertising and focus groups that their customers enjoyed the full taste without the red-sauce-infused bun, so they re-released the crunchy Angry Burger in 2019 sans bun.

So I guess you could say it’s been through a few revisions.

The Angry Whopper is one of the more flavorful fast food burgers I’ve eaten. The flame-grilled quarter-pound meat patty is juicy, and all of the components work well together. The mix of mayo and Angry Sauce give it a flavorful Chipotle-like taste, but the Angry Sauce is not as much of a firey hot sauce as its name implies. The crispy angry onion petals are a fun variation from grilled onions we find on most burgers and the sliced jalapeños add a bit of heat to the Whopper, but combined, these ingredients still don’t offer as much spice as one might expect. The fresh tomato slices and iceberg lettuce give the Angry Whopper a lightness and a freshness that I really enjoyed, and the crispy bacon strips do what bacon does best- makes everything taste better!! The sesame seed buns are soft, and the Angry Whopper is a nice full size. Even without fries and a drink, I was pretty satisfied after eating it! The toppings blend really well together, and each bite is full of flavor and crunch.

Ah, the nutrition. I would venture to guess that we don’t necessarily buy a fast food burger with high-nutrition in mind. For me, it is a good meal to grab once in awhile when I’m on the go, and I need something filling and fast in my stomach. At 850 Calories, the Angry Whopper is sure to upset your daily caloric intake! It also has 53 grams of fat, and 59 grams of carbs. Without the bun and the cheese, the Angry Whopper has 695 calories, 427.5 calories from fat, 47.5 grams of fat, 16 grams of saturated fat, 1325 milligrams of sodium, 37 grams of carbs, 12 grams of sugar, and 30 grams of protein.

*** Ingredients and Allergen Information via: BK.com.

The Angry Whopper is only available for a limited time, so I would say, if you are looking for a flavor-packed meal with zest and crunch, this is a definite hit. Especially given that this burger is priced under $5, it is a worthy option for loyal Burger King customers. You will probably miss it when it’s gone, so get it while you can!

With its unique flavor combinations, the Angry Whopper is a good choice and great value for a fast-food burger. Even if the signature Angry Sauce doesn’t pack the heat its name suggests, it gives the burger a good kick. To spice it up, I would ask for extra jalapeños.

What do you think? Did you find the Angry Whopper to be as spicy as the name might suggest? What other ingredients do you add to your Whopper to make it just the way you like it? Let us know. Maybe your idea will be a new favorite!