Taco Bell’s Quesarito is one of my favorite menu items. It’s one of the biggest burritos they serve (since they discontinued my favorite 7 Layer Burrito) and it’s packed with serious flavor and spice. It’s a meaty, cheesy, lime-cilantro rice burrito wrapped up in a cheese-filled quesadilla. Yes, it’s as delicious as it sounds. But now you can skip the Taco Bell drive-through, and make this amazing Quesarito from home with this simple recipe.

The most important thing here is to make sure you’re using large flour tortillas because the regular ones won’t hold all the ingredients very well. The quesadilla is made by sprinkling shredded cheese over a large tortilla and placing a second tortilla over the top. Let it cook on medium-high heat for a few minutes before covering it with the cooked beef and all the filler ingredients. You can add anything you like even if it’s not mentioned here- guacamole, salsa – it’s your masterpiece! Once you cover the quesadilla with all the fun stuff, roll it up, and cook the whole burrito until it’s golden brown. Watch all the cheese oozing out when you cut it in half- that’s when you know it’s good. 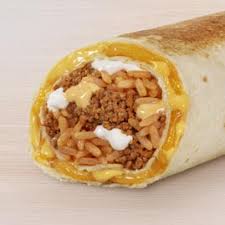 If you like grilled quesadillas filled with meat and cheese, check out our Copycat Taco Bell Crunchwrap Supreme recipe.