The Arby’s Melt falls somewhere in line with Burger King Cini Minis and KFC’s Doubledown – all classics and fan-favorites that were taken from us way before we were prepared to say goodbye. At the time, no one understood why the Arby’s Melt was pulled from the menu so soon. Was it a publicity stunt or a cruel joke? Arby’s fans everywhere have questioned why the Arby’s Melt was discontinued, and while we may never know the real answer, we’ve got some good news. You can still order the melt from the Arby’s secret menu.

What is the Arby’s Secret Menu Melt? 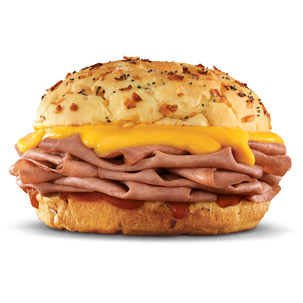 For those of you who need a refresher, the Arby’s Melt is only one of the most deliciously simple sandwiches the fast food chain has ever served. Containing two ounces of sliced roast beef, the Arby’s Melt is topped with cheddar cheese sauce and sandwiched together with a toasted sesame bun. What makes this sandwich stand out from the other dozen still on the regular menu is the cheese sauce. Many other sandwiches have melted sliced cheese – which is great – but there’s something so satisfying about the flavor profile of the cheese sauce and roast beef.

How To Order The Arby’s Melt?

With most secret menu items, you have to explain the ingredients that go into the dish when you order it. But since the Arby’s Melt was on the regular menu in the past, you can usually get away with ordering it by name. If not, it’s only a few ingredients so you can always explain what you want just to be safe.

Another way to order the Arby’s Melt is by asking for a Classic Roast Beef Sandwich with cheddar cheese sauce. You’ll end up with the same thing without the risk of having to be told that the Arby’s Melt has been discontinued.

If you’re unsure about ordering something from the secret menu, you can always ask for the Beef ‘N Cheddar, a new release that is extremely similar to the Arby’s Melt. The Beef ‘N Cheddar is stacked with roast beef and cheddar cheese sauce – the only difference is that it’s drizzled with red ranch sauce and place on an onion roll. And if you’re really hungry (like really, really), you can order the double or half-pound Beef ‘N Cheddar.

Some secret menu gurus have taken it once step further and ordered the Arby’s Melt or Beef ‘N Cheddar with bacon strips. It’ll cost you extra, but when is bacon not worth it?

If you’re curious about the nutrition info for the Arby’s Melt, we’ve got all the details below (thanks to its early days on the Arby’s menu):

What do you think of the Arby’s Melt? Let us know in the comments below.