Some of Arby’s meals are extra savory and delicious, but they’re packed with meat, calories, fat, and carbs. Wouldn’t it be nice if you could enjoy a filling satisfying meal without worrying about all of that? Vegan and vegetarian copycat recipes are gaining popularity, and it seems like there are always new ways to mimic the flavors while eating healthy. I’ll admit I was surprised to find out there is a Vegan Arby’s Roast Beef and Cheddar recipe because a roast beef sandwich is generally packed full of roast beef- so how could it be replicated without using meat?

We found an excellent recipe that calls for seitan, a vegan meat substitute made entirely out of hydrated gluten. It can also be called wheat gluten, wheat meat, wheat protein, or just gluten. The horsey sauce is made using tofu, spicy horseradish, and vegan mayo, and it’s tasty enough to pour on your sandwich or even to dip your fries into. Saute and carmelize sliced onions for about 25 minutes and set them aside until you’re ready to assemble your sandwich. Melt a slice of vegan cheese and put it all into a vegan bun to complete the sandwich. Serve warm and enjoy. 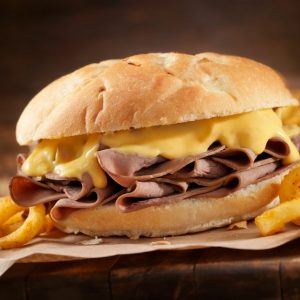 Vegan fast-food options are a growing trend, and we don’t see them going away any time soon. Be sure to check out our post on where to get the best vegan fast-food items for more inspiration.