Starbucks has a way of turning all our favorite candies and desserts into creamy, indulgent drinks. From the Twix Frapp to the Cinnamon Roll version, there’s no shortage of sugary delights to choose from. But as pretty as they sound, it’s not always obvious how to get your hands on one, especially when they’re on the secret menu. The Cinnamon Roll Frappuccino is one of the most popular secret menu drinks to date, and it really does taste like the liquid form of your favorite breakfast roll. So, what goes into this scrumptious masterpiece?

How To Order the Starbucks Cinnamon Roll Frappuccino 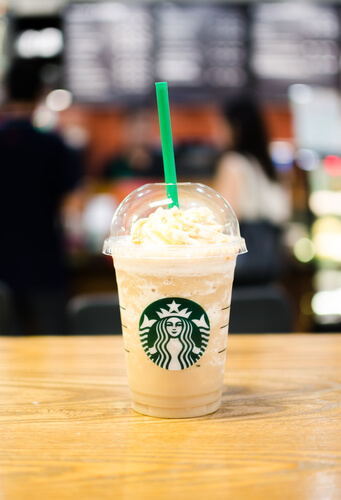 Ordering fancy drinks at Starbucks can be anxiety-inducing, right? Running through a long list of syrups, sauces, and toppings can feel like overkill, but fortunately for all of us, the Cinnamon Roll Frappuccino only contains a short list of ingredients. When you order it, start by asking for a Vanilla Bean Frappuccino. Easy enough. Then, ask your barista to:

You can try ordering the Cinnamon Roll Frapp by name, but there is no guarantee that your barista will have heard of it or know its ingredients by heart. However, you don’t have to worry about being denied your secret menu frappuccino because Starbucks will make you anything to order – whether it’s on the menu or not – so long as they have the ingredients on hand.

There’s another version of the Cinnamon Roll Frapp that we had to share. If you want something even more indulgent and sweet, try the Red Velvet frap. It’s quite a bit different than the original listed above, but it still has that comforting cinnamon taste. To order one, start by asking for a Mocha Frappuccino made with both mocha sauce and white mocha sauce. Then, ask your barista to:

Have you tried either the regular Cinnamon Roll or the Red Velvet Cinnamon Roll Frappuccino? Let us know what you think in the comments below.